The project has been scheduled to be ready by 2026 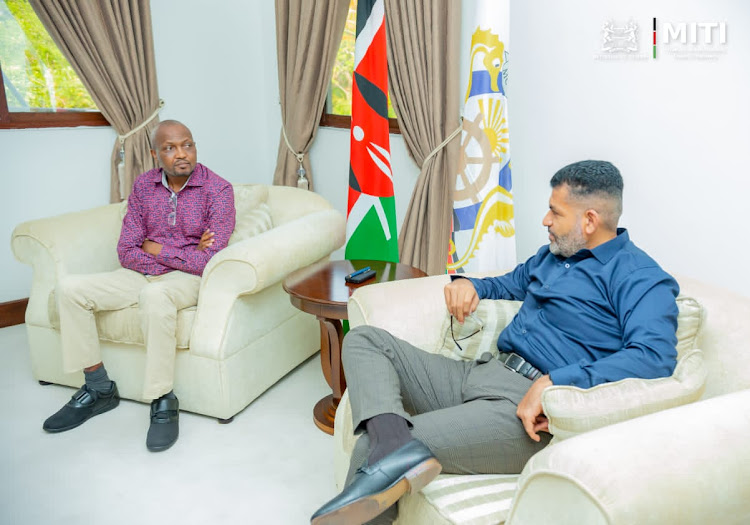 Trade and Investment Cabinet Secretary Moses Kuria on Monday said the Sh40 billion project, which had been scheduled to be operationalised by 2026, has been brought forward by three years.

Kuria chaired a closed-door meeting of the Mombasa Special Economic Zone (SEZ) Technical Coordination Committee at the Port of Mombasa.

According to the CS, the national government working in collaboration with other government agencies have deployed innovation, creativity and teamwork to cut the project’s timeline by three years.

The agencies include the Mombasa county government and other private stakeholders

“We are going to use short-term measures as we wait for the long-term bigger project and we expect Dongo Kundu to be fully operational by July 1, 2023,” Kuria said.

He said the other major projects, which include the roads and berths, will be completed by 2025.

“The other major project will continue all the way to 2025, but that will not stop investors from moving in. We expect that July this year is going to be a beehive of activities, thus cutting short by three years a project that was supposed to start by 2026,” he said.

According to Kuria, the Technical and Coordination Committee agreed and made a commitment to some eight key issues that will ensure the project is operationalised this year.

The State Department of Investment and Promotion, under Principal Secretary Abubakar Hassan, was tasked to advertise for expressions of interest in local and international media to attract investment to key 13 sectors around the SEZ.

The government is looking for investors in agro-processing and industries, oil and gasses, petrochemical industries, green energy and renewables, blue economy, water desalination and service provision and heavy metal and steel.

The advertisement should be done by January 31, Kuria said.

Kenya National Highways Authority Director General Eng Kungu Ndungu has been tasked with ensuring all the major road projects within the expansive SEZ are developed to gravel standards to ensure that investors have access to the site.

“KeNHA and Kenya Rural Roads Authority will commence design, bidding and opening up of 12 kilometres of the access road to gravel standard awaiting completion of the major road works to asphalt standard,”Kuria said.

Kenya Electric Transmission Company has also been giving the March 31 deadline to ensure that the site has the provision of 12 kilometres of 33 KV And LV network of internal power for the last mile distribution, awaiting completion of Mariakani Dongo Kundu power supply line and Dongo Kundu substation.

KPA will initiate port services through the Kilindini Port via a road network to Dongo Kundu awaiting completion of the Dongo Kundu berth.

On the issue of land, which is critical to the project, Kuria said the National Government Administration Officers (Ngao), Lands Principal Secretary Nixon Korir, National Land Commission chairperson Gersom Otachi and Mombasa county government will work in ensuring that a title deed is available for resettlement, development and investment.

“We will amalgamate the four Dongo Kudu titles, subdivide and title for port development, SEZ development and the Project Affected Persons (PAPs). All these should be done latest by March 31, this year,” Kuria said.

They will also complete compensation awards and payment of Sh1.4 billion to 1,582 PAPs for development. The compensation process should also be completed by end of March.

“The agency will commence design, bidding, and drilling of boreholes, construct water pans, storage and ensure water supply to investors awaiting the completion of Tiwi and Mwache dams,” said Kuria.

Mombasa Governor Abdulswamad Nassir said that his administration will assist on the part of the survey and also the identification of the affected persons.

“We will ensure that we assist in the water and sewer plans and seek other political leaders so that the money for compensation is paid to the right people and do it on the stipulated time,” Nassir said.

Mombasa regional commissioner Rhoda Onyancha said that they have agreed on the timelines.

To be ready for investors by December next year.
Business
3 weeks ago

According to the Kenya National Chambers of Commerce and Industry, the last three years have been a roller coaster for businesses
Counties
5 months ago

National Treasury is in talks with DP World on key harbor, rail projects.
Business
7 months ago

Uhuru expected to visit Mombasa for special economic zone plan ground-breaking before his term ends
Counties
8 months ago
Post a comment
WATCH: The latest videos from the Star
by AURA RUTH
Coast
16 January 2023 - 18:27
Read The E-Paper