Say the 60,000-acre property is their ancestral land 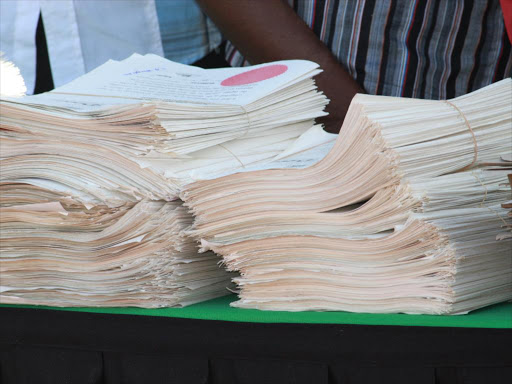 Residents of Maji ya Chumvi land adjudication section in Chengoni ward, Kinango, Kwale county have called on President William Ruto to intervene in a land tussle pitting the community and private developers.

The residents want the President to intervene and stop any activity on the disputed land that measures approximately 60,000 acres, saying it belongs to the community.

According to the residents, the property is their ancestral land, where their ancestors had settled as early as during the First World War in 1914.

Led by Rev Fredrick Kanato Ndaikwa of the East Africa Pentecostal Church (EAPC) Samburu parish, they accused some local leaders  of working in cohort with officials from the Lands Ministry, to allocate land to cartels.

Addressing the media Thursday in Deri village after holding prayers for the land, Kanato said since the land was declared an adjudication section in 2014, cartels have been eying to take it away land from residents.

“We surprisingly realised that the cartels had already begun subdividing parts of the land in 2017 without our knowledge. We raised the matter but nothing much has come out of it,” Kanato said.

The President is on Friday expected to make his maiden visit to the Coast since he was sworn into office on September 13.

According to the President’s itinerary, he is expected to open the Devki Steel Mills in Samburu, Kinango at 9am before heading to inspect the progress of the Dongo Kundu project in Likoni at 11am.

“We want the President to intervene on this matter and ensure the 1,480 families living here get the justice they deserve,” Kanato said.

He said they took the matter to the former Kinango MP Benjamin Tayari who raised it in the 12th Parliament.

He said Parliament scheduled a visit to the area and even wrote to the then Lands CS Farida Karoney to investigate the matter.

However, a planned visit by the National Assembly Lands Committee to the area failed to take place after chaos broke out on the day of the visit.

Kanato said the land was illegally adjudicated, reducing the land owned by the community and allocating more to people from outside.

About 500 title deeds are set to be released, which the residents have disputed, saying they were not involved in the process as a matter is already in court. They said the titles do not reflect the exact acres on the ground.

“We are calling on the government to stop any activity of adjudicating the land until the dispute is resolved, any title issued should be revoked with immediate effect,” Kanato said.

They have already petitioned the government to stop the issuance of the title deeds as they want the subdivision and allocation of the land to be done afresh.

Nyota Mgandi 59, an elder of the Mwamundu Kichororo clan also appealed to the President to intervene in the matter insisting that justice must be done for the community.

He said as a community, every family knows the boundary to their land and as such would not allow anyone to shortchange them.

“All we want is our land back President, please find time to look into this matter and help us," he said.

The residents also called on the government to investigate land officials in Kinango and Kwale saying some of them were behind the scheme to rob the community of their land.

“Let the DCI come and investigate these officers here, some of them are working with these land cartels,” Chale Hunde said.

Hunde added that they feel helpless and threatened to fight for their land.

The Lands Ministry and the National Lands Commission had previously revoked 70 title deeds that were fraudulently acquired in the area.

This was after an audit chaired by the Coast Regional Commissioner John Elungata showed that some parcels of land hand exchanged hands fraudulently through illegal allocations.

The audit further revealed the committee which was carrying out the land adjudication in the area had also illegally allocated land to themselves, which the RC ordered to be surrendered back.

He said there has been a rising wave of land grabbing cases in the constituency.
Counties
2 weeks ago

Residents say  tycoons have been grabbing their ancestral land, rendering them homeless.
Counties
1 month ago
Post a comment
WATCH: The latest videos from the Star
by ONYANGO OCHIENG’
Coast
18 November 2022 - 22:00
Read The E-Paper