Zimbi scolded the fishermen for not following the due legal process

•Fishermen Mohammed Omar Mgala who spoke through a phone call said they had been hired by a businessman and his friend both of Somali origin to fish in Somalia.

•But due to insecurity and hostility by Somali fishermen, they opted to change the deal and demanded the businessman return them home. 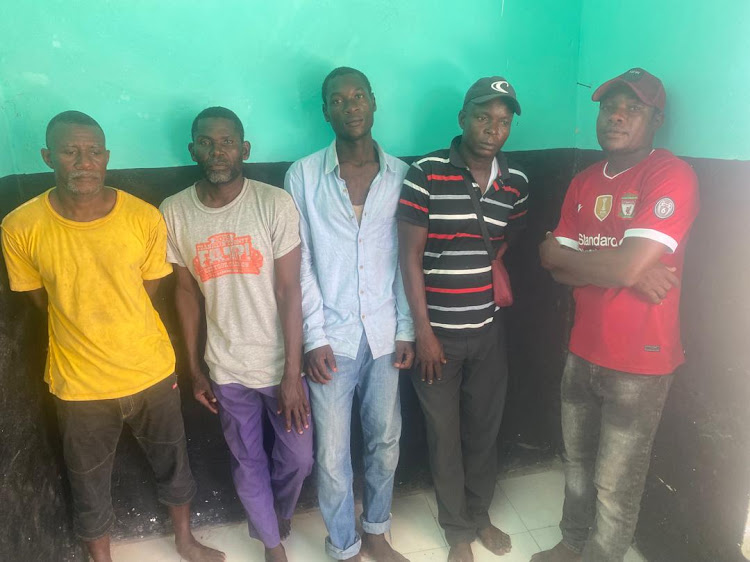 Five Kwale fishermen stuck in Somalia have appealed to the Kenyan government to help them return home.

The five, all locals of Shimoni in the Lunga-Lunga sub-county, found themselves in trouble when their fishing deal went into headwinds.

According to one of the fishermen Mohammed Omar Mgala who spoke through a phone call, they had been hired by a businessman and his friend both of Somali origin to fish in Somalia.

But due to insecurity and hostility by Somali fishermen, they opted to change the deal and asked the businessman to return them home.

"On several occasions, some of the Somali fishermen took our fish saying it belongs to them and the area is full of insecurity. The businessman insisted we can't leave," he said.

Mgala said ever since the businessman has been threatening to take them to Al-Shabaab for disciplinary action.

He said they were later taken to Kismayo. They contacted people back home who reached out to relatives working with Kenya Defence Forces who assisted them in getting to Somalia police.

The fishermen, however, said they can't be released since the businessman is demanding Sh270, 000 as compensation for breaking the deal.

"The man now wants money to cater for expenses he incurred for bringing us to Somalia," he said.

Mgala said they are at the moment held in the Chovaya area and two weeks have gone by so far.

He said they were around 12 fishermen but some of them were released after their family members paid Shh88, 000.

Mgala said the released fishermen were to help colleagues raise the remaining balance but have since cut down communication.

He said they are now fearing for their lives as they are being intimidation each day.

Mgala said a majority of them are poor and their families can't raise the money.

He said some had earlier sold their piece of land to contribute money for their release.

The fisherman said they are living in a pathetic environment with stones as their mattresses.

"We don't have food. We sleep down and each day it feels like it is going to be our last," he said.

However, Kwale authorities have said that investigations are already ongoing.

Lunga-Lunga Sub-county police commander Peter Mutua Zimbi said they got the report but not through an official channel.

"Yes, I am aware of the issue although nobody has reported that," he said.

Zimbi scolded the fishermen for not following the due legal process of travelling and fishing outside Kenyan waters.

He said most of the fishermen would strike illegal deals and only seek help when things go south.

"The problem with these people is that they don't learn, they do things secretly and call for assistance when they get in trouble," he said.