Aim is to create jobs and business opportunities around Lamu port 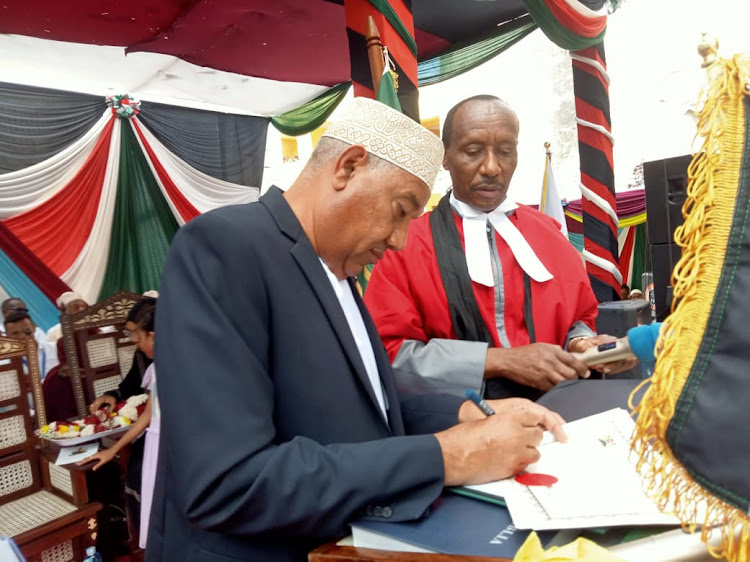 The aim is to create jobs and business opportunities around the Lamu port.

Governor Issa Timamy said plans were already underway to secure at least 300 acres for a special economic zone, where the industrial park will be situated.

The plans to build the industrial park are in line with the county chief's recent revelation during a tour of the Kililana port that his administration plans to host a county investor conference.

The objective, he said, is to attract private sector players who would aid in transforming Lamu’s standing from a backwater fishing area into a regional industrial bulwark.

“The county government plans to host the investor conference in November in conformity with the LAPSSET’s plans to host a resort and port city, which would be ideal for creating direct and indirect jobs and businesses that are anchored to the Sh40 billion Lamu port investment,” Timamy said.

He said the industrial park also complies with the Lamu County Spatial Plan launched in 2016, which aims to transform the county into a regional logistical and industrial hub.

“The funding for the industrial park will be based on a Public-Private Partnership model in which we will designate a substantial acreage for private investors to set up industries, chief among, them Export Processing Zones,” the governor said.

Lamu Trade and Tourism chief officer Atwaa Salim said that once set up, the industrial park would have a multiplier effect of creating jobs and opportunities for hundreds of youth in the county.

“We also need to contend with the reality that the industrial park will further lead to an influx of people, especially once it ties itself with full operationalization of the Lamu Port,” he said.

Salim also said the county would also with the national government to be part of the affordable housing programme.

Lamu Chamber of Commerce chairman Ikhwan Omar commended the county for prioritising the construction of the industrial port city.

The Lamu port has so far been marketed as a transshipment hub, with Agriculture Cabinet Secretary Peter Munya launching a Livestock Export Zone earlier this year.

Lamu Senator Joseph Githuku said he would lobby the national government to allocate special funds towards setting up the industrial park that would aid in transforming the county as an ideal financial destination.

“The industrial park would aid in reviving industries such as cotton, cashew nuts and fruits that Lamu produces in plenty yet very little goes towards value addition and processing,” the legislator said.

He further said a policy paper is needed to effectively implement the project in a bid to prevent it from being derailed.

Githuku asked the Lamu county assembly to actively debate and engage the county executive on the modalities of the proposed industrial park in order for the project to have the greatest impact to Lamu's unemployed youth.

KCSAP is said to have injected Sh20 million into the first phase of the stalled project.
Counties
1 year ago

Lamu to get Sh100m cotton ginnery to revive sector