•Sharon Cheptoo, a professional nurse at Majengo Mwembe Tayari hospital said that there is a need for leaders to invest more in free health-related camps.

•This, she said, will help people who cannot afford to pay hospital bills to get access to the services. 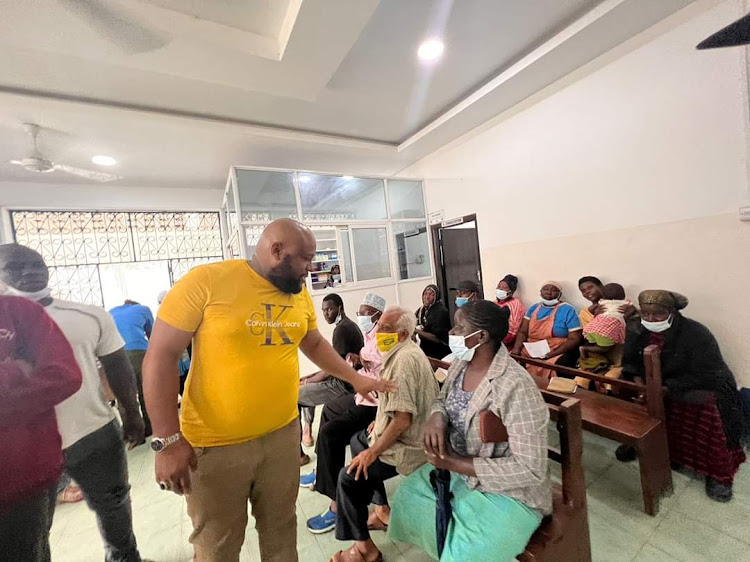 Many people in Mombasa cannot access treatment in hospitals because of the harsh economic times facing the region.

Sharon Cheptoo, a professional nurse at Majengo Mwembe Tayari hospital said that there is a need for leaders to invest more in free health-related camps.

This, she said, will help people who cannot afford to pay hospital bills to get access to the services.

"Provision of free medical services by our leaders and other stakeholders is a very key and important initiative that should be embraced by everyone. Rather than giving them money, give them medical prompts which will help us as a country,” she said.

Speaking during a medical camp organized by the Mvita Member of Parliament aspirant Said Twaha where more than 1,500 people were treated, Cheptoo said that their priority as health professionals is to make sure that the community gets access to health services.

She said that many people are living with diabetes and hypertension diseases which are not known to them.

“We have people who are living with different health-related conditions but they are not aware because they have not been screened, some are aware but they do not visit hospitals for treatment due to the high cost of living," she said.

She said that mental health is one of the problem facing many people in the community.

“We have so many people who have mental illnesses, people are depressed but they are not aware if they can get services if they visit health centres," she said.

“We received so many new patients who have mental related problems during the two days of free medical camp therefore it is a challenge that needs to be addressed in the community.”

Cheptoo said that the level two hospital which has never had such a huge number of patients coming for treatment, some people did not even know about its existence while some believe that the services in the hospital are expensive so they do not see the need for a visit to know their health status.

"This place was really affected by the dengue fever disease outbreak and through the free services, many people who were screened tested positive," she said.

"Therefore it is an initiative that should be considered because it does not only help people access the services but make them happy in their hearts."

Twaha said that health services are the key point in his manifesto because despite it being a devolved function, he cannot sit back and watch people suffer.

"Many people are raising concerns that they cannot afford money to treat themselves and their children due to the current status of our economy. That is why we came up with the program to help them access the medical services,” he said.

Twaha said that if given the opportunity to lead as Mvita MP, he will mobilize resources by involving other stakeholders and ensure that the free services are offered once per quarter because getting medical attention is expensive yet people really need it.

Majengo ward MCA aspirant Shufaat Mohammed said that leaders have failed to give health services priority yet most people do not have the ability to access the services.

“We have sick people who are at home because they don't have money for the hospital. We still have a lot to do in the health sector because people are complaining, therefore it is our responsibility as leaders to give health priority, when people are in good health, other things can follow," he said.

Hussein Adinad, a resident at Majengo in the Mvita constituency called upon the government to also invest more in such activities to help those who cannot afford money for treatment.

“This is a good initiative because personally, my pressure was high. I only knew that after being screened, I was given drugs to control it therefore our people need more of such activities to help them know their health status,” he said.

Mr President, come to Bamba for your gift of 10 turkeys - woman