Awiti is making a second attempt at the governor seat after losing in 2017. 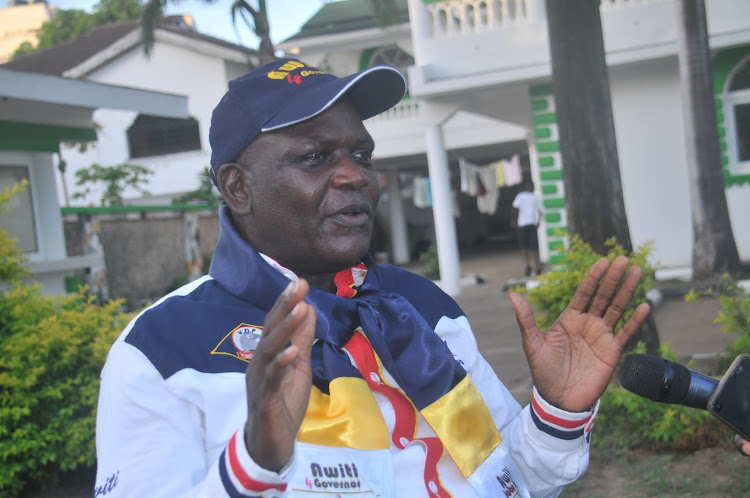 Awiti, who is taking a second shot at the seat on his Vibrant Democratic Party ticket after losing in 2017, remained upbeat that he was going to win the election.

“They are saying that he (Nassir) is leading, he is leading nobody. If they think that Awiti has no people, let them wait for me on the ballot,” he said.

“They are in for a rude shock, we are winning this election.”

Awiti was addressing community leaders drawn from Mombasa during a meeting held at the Wild Waters on Wednesday.

He promised to unite all communities living and working in Mombasa if elected governor and ensure equity in the distribution of county resources and provision of services as he alleged discrimination in the current regime.

“There is a lot of discrimination in the county, my candidature is pegged on ensuring that I unite the people of Mombasa. The division of revenue and resources must be equal for all Kenyans,” Awiti said.

He called on ODM leader Raila Odinga to allow aspirants from other political parties affiliated with the Azimio la Umoja coalition, eying the same positions to be allowed to battle it out for the wananchi to decide.

“We are not fighting, what we have is just sibling rivalry. ODM has been at the helm of the county for ten years, it’s time they let another party lead the county,” he said.

Awiti also promised to devolve county administration to the sub-county level to bring services closer to the people if elected governor.

“I will address the garbage issue bedevilling Mombasa in my first 100 days in office by engaging the youth to do the cleanup. Our youth must be given first priority in the tendering process in the county.

He also called for peaceful campaigns ahead of next Tuesday’s elections following rising political temperatures in the county.

Last Saturday, several youths were injured in the Kongowea ward after supporters of Nyali MP Mohammed Ali and those of his main opponent Said Abdalla of ODM clashed.

The VDP leader’s gubernatorial bid also got a boost after Wiper candidates for the senate, woman representative, and Nyali MP, together with candidates from other parties including the Jubilee candidate for Nyali endorsed him.

Led by Abdulsalaam Kassim, who is eying the senate seat for a second term, the aspirants vowed to rally their supporters behind Awiti.

“We must get the right leadership in office because Mombasa belongs to all of us. Wiper people are wise, we will vote in the right place,” said Kassim.

Kassim also called out to leaders who had ditched the Wiper party to have respect for their party leader Kalonzo Musyoka.

He cautioned them against involving the Kamba community in their betrayal, saying that the party and community know the better decision to make.

“Kalonzo Musyoka deserves respect, furthermore Wiper and the Kamba community are not watermelons as you want to portray them. Don’t mention them in your politics, they are a respectable community,” he said.

This is even after Wiper chairman in Mombasa Sheikh Twaha Omar on Tuesday afternoon led a team of delegates drawn from the six sub-counties in Mombasa to endorse Nassir for governor.

Former Nairobi governor Mike Sonko has also endorsed UDA gubernatorial candidate Hassan Omar, after his bid in Mombasa was blocked by the IEBC and Supreme Court.

Former Nairobi governor was blocked from running after court declared him unfit to hold public office
Counties
1 week ago
WATCH: The latest videos from the Star
by ONYANGO OCHIENG
Coast
03 August 2022 - 22:53