Ruto said there are more than five million unemployed graduates in the country. 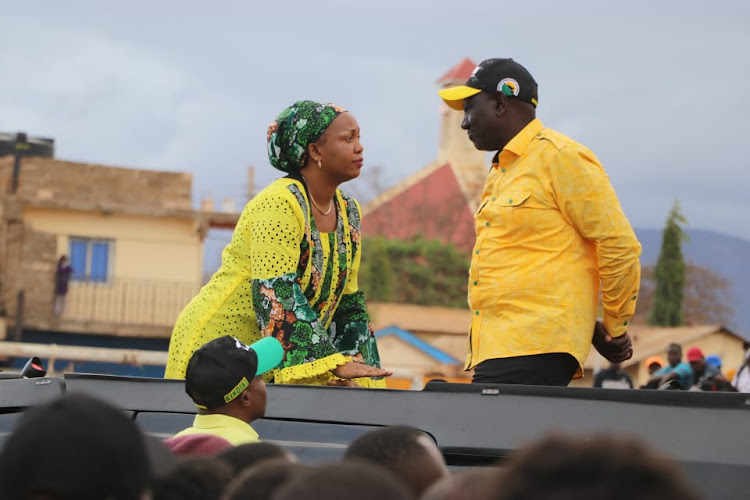 Deputy President William Ruto has promised to address the escalating level of unemployment in the country if he wins the presidency in the August polls.

Ruto said that the government will invest at least Sh200 billion in the housing, agro-processing, and manufacturing sectors in a bid to build the economy and create jobs.

Speaking while courting supporters at Njukini in Taita Taveta County on Wednesday, the Kenya Kwanza leader said the number of unemployed youths is alarming and should be addressed.

He chided his rival Raila Odinga for promising to give out Sh6, 000 to the jobless youth, further terming it a fake promise.

“The problem of jobs can only be addressed by establishing income generating projects, industries, and supporting young entrepreneurs,” the DP said.

He said there are more than five million unemployed graduates in the country, with the number expected to increase by 6,000 youths annually.

He further promised to channel Sh50 billion into supporting small and micro-enterprise businesses in the country as a way of creating self-employment.

Ruto kicked off a three-day blitz campaign of the Coast region on Tuesday in an attempt to woo voters ahead of the general elections.

The United Democratic Alliance (UDA) party leader has made consistent visits to the region in the past three months that has for long been considered an ODM zone.

The DP has lined up governors Amason Kingi ( Kilifi), Salim Mvurya (Kwale), and a contingent of senior politicians to wrestle the region from Raila’s grip.

Both Ruto and Raila are in a heated battle to fight for a pie of the 1,963,144 registered voters.

“If elected in August, my government will set aside Sh100 billion to support the agriculture sector. Our priority is to ensure that food insecurity is addressed,” he added.

Ruto said the government shall resume implantation of the Big Four Agenda that he said had been derailed by the handshake between President Uhuru Kenyatta and Raila Odinga.

Machakos Governor Alfred Mutua, who accompanied Ruto, said the Kenya Kwanza team has an elaborate and marshal plan to address food security in the country and lower prices of basic commodities.

He said the recent government's promise to lower the cost of maize flour is an attempt to woo Kenyans into voting for Odinga.

Taita Taveta woman representative Lydia Haika asked the Deputy President to address the land tussle in Sir Ramson in Njukini where hundreds of residents are living as squatters.

Haika said the residents could hardly invest in their land for fear of being evicted by investors whom she alleged have grabbed the land.

Besides Taita Taveta, Ruto will address a rally at Ukunda in Kwale in the evening.

On Thursday, Ruto is set to lead campaign rallies in Lamu, Tana River, and Kilifi counties.

He is expected in Faza in Lamu County on Thursday at 8 am, before holding another meeting at Mpeketoni at 10 am.

At 11 am, Ruto will be at Bayusuf grounds in Hola Town, Galole constituency, and later at 1 pm at Tarasaa Town Centre, Garsen constituency, both in Tana River.

He will later in the day be in Malindi in Kilifi. On Friday, the Deputy President is expected in Mombasa.

Ruto showers Gachagua with praise after face off with Karua

Ruto described him as " a successful elected politician."
News
2 months ago

Ruto: I have the solution for the high cost of living