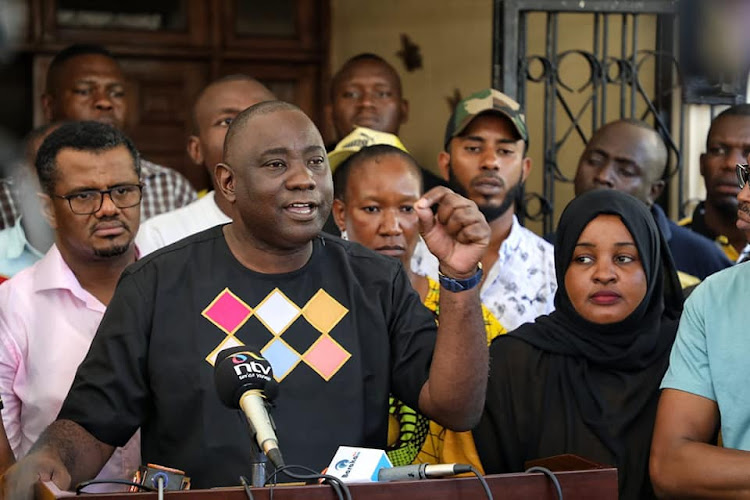 Jomvu residents in Mombasa want the government to ease restrictions on the sale of the local brew mnazi.

Brewers said they have always been on the run because police officers arrest them for selling the palm wine.

He said he is among the leaders who fought for palm wine to be legalised through the leadership of former Kisauni MP Karissa Maitha.

“During former President Mwai Kibaki's era, there was a parastatal which was formed to streamline palm wine business but today it's shocking  that our security officers are arresting brewers," he said.

“This shows that we are not well-informed about the law implemented by the government."

Nzai said the government was supposed to restrict the time of drinking palm wine but not harass business people.

He said the trade has created job opportunities and offers many economic benefits to the residents and the country.

Nzai said UDA party leaders are in the process of working together to help women in Jomvu open a sacco to help them in their palm wine business.

“We have a county like Makueni that under the devolved government has created a market for their products and now exporting their produce but in Mombasa, we have done nothing to smile about,” Nzai said.

He said there is enough land that can be used for coconut farming.

“Today we can produce coconuts within a short period of time.  The product takes only three years to be ready,” he said.

“Why do we import coconut milk when we can make it on our own, it is a product that will give us a lot of income. The government needs to help the coastal people tap on this natural resource,” he said.

Bonze Keya, a local brewer, who has been in the business for 36 years said the drink is not illegal.

“I have always been on the run with the police officers yet I managed to build my house and educated my children through the palm wine business. We want the freedom to sell the brew because we know the benefits,” she said.

Bahati Kahindi, another brewer, who has been in the business since 1980 said that they have even been jailed because of the business.

“We have always had a problem with police officers, we, therefore, want the government to guide us and legalise because this is our fruit,” she said.