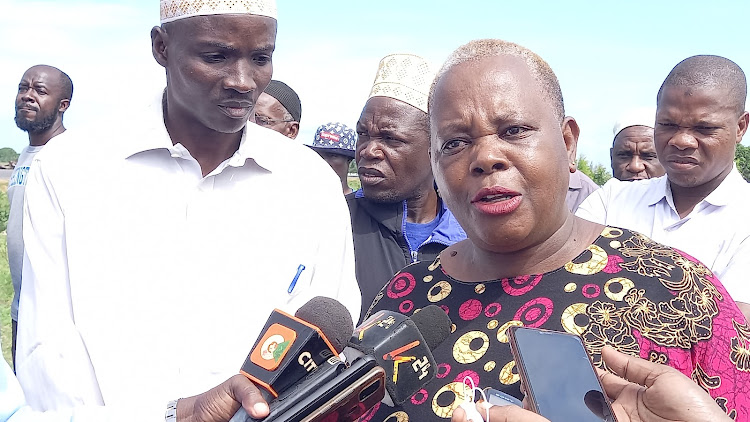 Lunga Lunga residents in Kwale are calling on the government to help solve protracted land disputes in the area.

The residents allege the area is experiencing a surge in land injustices by private developers and investors who claim ownership of their ancestral lands.

Led by Ginora Kinyasi on Tuesday, they claimed the wrangles have left many homeless and in pathetic conditions.

She said a month won't end without a private developer or investor demanding ownership for huge parcels of land.

She said the evictions are done with the aid of security forces who keep guard as bulldozers take down property worth millions.

Kinyasi said the demolitions have also escalated food insecurity amid the rising cost of living.

"Some of the investors are destroying our crops, which is our only source of livelihood. How are they expecting us to survive in these hard economic times," she said.

Kinyasi said they are now tired of injustices and want the government to restore order.

She said they don't oppose development but investors and private developers must respect the law and the rights of residents.

Another resident, Omar Mulatia said he was surprised that many were suffering in an era, where there is democracy and the power of law in Kenya.

"How can all these injustices thrive yet the government is watching," he said.

Mulatia said freedom will only come when Kwale has no squatters and all culprits are brought to book.

He said currently, most of the residents in the region are living in fear as private developers and tycoons salivate for their ancestral lands.

The residents have also called on the next government to prioritise land injustices citing it as key problem to their socio-economic growth.

Another resident Fauzi Kasim said the investors have been violating court orders to deprive residents their rights.

She said the government should be keen and take action against the perpetrators adding that their behavior is intolerable.

Kasim faulted the local authorities for taking sides and urged them to be neutral.

"Residents are angry and it is because they trust this government and love peace that's why they are calm but that shouldn't be taken for granted," she said.

A Lunga-Lunga activist Mohammed Mwakuyala said the escalating land injustices are promoted by the failure of respective agencies to complete the cases in court.

It is believed that many residents don't have title deeds and are unable to prove the ownership of the land.

"It is shocking that some people claim ownership of certain lands but don't know where the land is located," he said.

Currently, there is an ongoing land dispute case between Kanana residents and Kwale International Sugar Company.

Others disputes are in Wasini, Shimoni, Anzwani, Gandini, Diani, Tiwi, Mwaluphamba, Tsuini in Vanga and many more.

Last, year Governor Salim Mvurya warned investors against land injustices. He also cautioned tycoons that there was no cheap lands to buy in Kwale.

Some residents were reported to be selling land at Sh5,000 in Lunga-Lunga and Kinango.

They were charged for allegedly allocating Sh30 million parcel of land.
Counties
1 week ago

They are being taken to Integrity centre over Sh30m beach plot in Diani.
News
1 week ago

They make the briquettes through manual and electrical machines donated by WWF.
Counties
1 week ago

This is to help address challenges faced by the widows in the region.
Counties
1 week ago

Brokers leave Kwale farmers with just Sh1 for each mango

A single mango sells at Sh5 but middlemen take Sh4 and the trader is left with only Sh1 for every fruit.
Counties
2 weeks ago
“WATCH: The latest videos from the Star”
Coast
21 June 2022 - 22:00