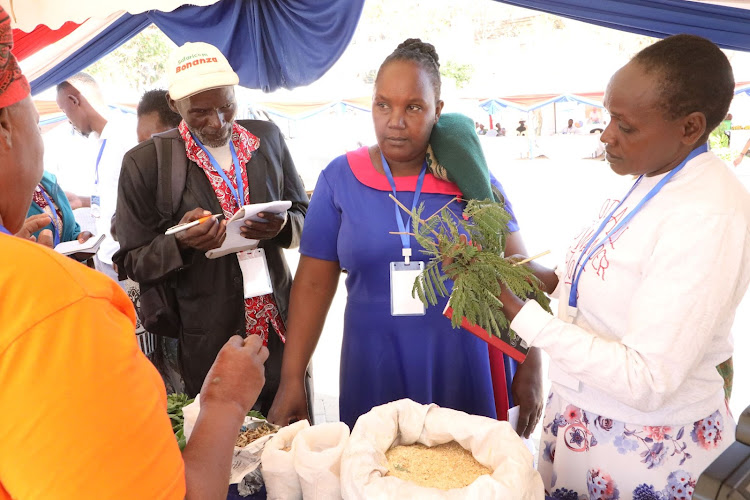 Farmers in Taita Taveta county have been advised to adopt climate smart technologies in farming during the July-September prolonged dry season to realise better yields.

"We are advising farmers to plant drought-tolerant crops in order to realise better yields. Livestock farmers are also advised to store fodder for future use," he said on Sunday.

Speaking during the closing ceremony of the first County Resilience Knowledge Fair at Taita Taveta University, the director said many farmers in the region had recorded low yields due to the failed March-May rain season.

Mbogho said the county recorded below normal rains that were minimal and poorly distributed in time and space. Further, the county vegetation greenness condition was below the normal range.

“Planted crops were in poor condition and withering due to moisture stress. On average, most areas experienced less than three wet days as reported by various rainfall stations,” the director added.

The farmers’ fair was meant to sensitise them on enhancing community learning to increase adaptive capacity to shocks and stresses.

The Centre for Strategic Development CEO Hudson Aluvanse underscored the importance of training communities on different farming approaches that would help them mitigate the effects of drought.

"Through this fair, farmers have been educated about technologies, approaches and models they can use to boost productivity,” he said.

Aluvanse told farmers to enhance proper storage of the below normal harvest that will be realised in the highlands areas of the county to take them throughout the year.

He said the agency is working with other stakeholders to train and empower farmers on new farming technologies.

Owing to the below average rainfall, he said the number of people faced with hunger in the region might increase, further urging farmers to put in place mitigation measures.

According to Kenya Meteorological Department, June, July and August are likely to be generally sunny and dry thus posing a risk to not only crop production but also to livestock keepers.

According to NDMA's June warning alert, the region’s soil moisture percentage climatology for June-September season will be below normal.