State pushing to have Huduma centers in all 290 constituencies

To date the country has 52 Huduma centers spread across 47 counties. 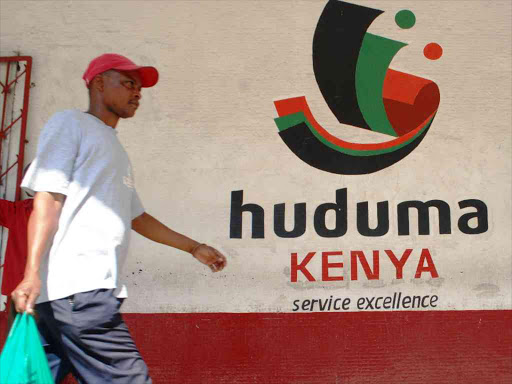 A man walks past the Huduma Centre Mombasa. /FILE

The national government is planning to formulate a law that will allow the National Government Constituency Development Fund (NG-CDF) to set up Huduma centres in all the 290 constituencies across the country.

Members of Parliament have been requesting to set up the facilities to bring services closer to the locals.

Public Service Chief Administrative Secretary Rachel Shebesh said the biggest challenge of not having enough Huduma Centers in the country is a lack of legal backing.

“We have had a lot of requests from MPs writing to us requesting to help set up Huduma Centers for the government to come in and provide services. However, because of no legal backing, we haven’t been able to do so,” said Shebesh.

She was speaking during the Huduma Kenya Service leaders’ workshop in Mombasa.

The meeting brought together all Huduma centre managers in the country and service providers to discuss the challenges faced and give recommendations on the way forward.

In 2013, President Uhuru Kenyatta launched the Huduma Kenya Service Delivery Programme with the opening of the first Huduma Centre in Nairobi.

To date, the country has 52 Huduma centres spread across 47 counties.

Shebesh said that setting up the Huduma Centers in the country was a game-changer in terms of service delivery, adding that government services had moved much closer to the people.

She said that there has been an appeal by most Huduma centre managers to expand as the few centres available in the country have become congested.

Mombasa for example, she said, had only one Huduma centre providing services to a population of over 1.2 million people.

“If NG-CDF can be expanded as most MPs have suggested to set up Huduma centres, then you can imagine that you can almost have a Huduma centre in every constituency,” Shebesh said.

The CAS said the push was also necessitated by the distance covered by citizens in far-flanked areas to get to the centres to access government services.

In 2017, the government introduced Huduma Mashinani Program, a citizen-centred mobile program that brings services closer to the people at the grassroots level.

However, Shebesh said that the expansion program comes with its own fair share of challenges.

“As you are aware, we are in charge of keeping government data and records safe in all Huduma Centers, we must be sure if we can be able to secure this data as we plan to expand,” she said.

She said that having enough service providers from all the government agencies at the centres was also going to be a challenge.

Plan seeks to address vulnerabilities to the country’s ICT infrastructure and systems.
News - Page 6
2 weeks ago

Critics of the Huduma Namba have also invoked lack of public participation to oppose it.
Opinion
2 weeks ago
WATCH: The latest videos from the Star
by ONYANGO OCHIENG
Coast
17 June 2022 - 01:09