This is to help address challenges faced by the widows in the region. 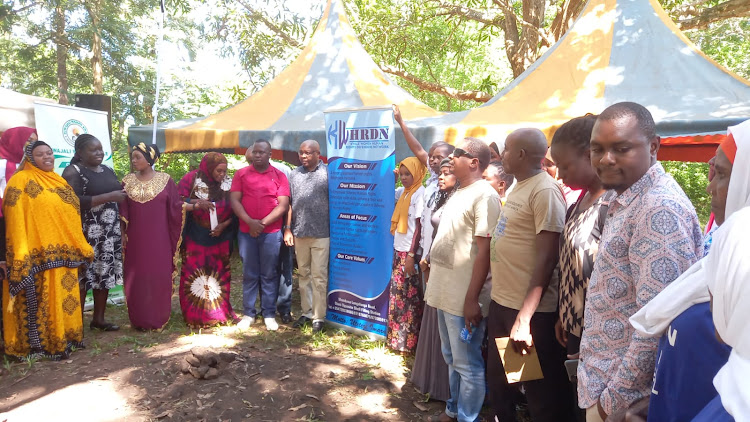 This is to help address challenges faced by the widows and empower women’s rights defenders in the region.

According to Tuwajali Wajane, a Kwale-based women's affairs organization director Mwanasha Gaserego the network will provide a wide range of skills to the rights defenders and socio-economic, and psychological support to both the widows and activists.

Gaserego said most of the time the rights defenders, especially women, face a myriad of obstacles while performing their duties.

The challenges include; intimidation, threats, sexual harassment, and financial constraints.

"In many instances, rights activists become vulnerable while defending others and also go through depression," she said.

The Network comprises over 20 small rights organisations that have merged to enhance the well-being of women rights defenders to effectively participate in human rights defence.

Gaserego said the KWHRDN will also be focusing on areas of resource mobilization, social-economic justice, leadership, peace, and security.

She spoke during a pre-celebration of International Widows Day at Msambweni Forest Park in Kwale on Wednesday.

At least 821 Msambweni widows are benefiting from the Tuwajali Wajane organization.

The organization operates under the sponsorship of the Fazil Chinoy Fellowship, which is managed by Samba Sports Youth Agenda on behalf of the donor.

Gaserego said more women are continuing to enrol themselves and many have changed their lives through socioeconomic activities.

"There is a big change because earlier they lived a lonely and miserable life," she said.

The majority of women had been assaulted and had their property taken away by relatives of deceased husbands.

Some had to run away from the old tradition of wife inheritance.

It is also believed that a number of people are using non-existing religious quotes to deprive women of land and property inheritance.

Gaserego said many widows can now stand for their rights and seek justice through proper channels unlike before.

She also called on the political party coalition to include widows in their manifestos.

The right defender complained that many political parties have sidelined widows in their agendas but are using them to get into power.

KWHRDN coordinator Elisheba Okech said the network will play a crucial role in supporting the mental health of the right defenders.

She said it will help them open up and find solutions to their problems since many suffer in silence because of fear.

"We understand that some of us opt to keep quiet because we are bothered with how our clients will look at us," she said.

Okech said the Network will bring together all women’s rights defenders and form a strong coalition to fight gender-based violence in the region.

She said it will enhance women to effectively respond to any kind of threats and seek safety measures while executing their work.

She said the women are aware of the appropriate legal actions to take and reporting of gender-based violence.

Msambweni Deputy County Commissioner Kipkoech Lutiatia said the widows have the full support of the government.

He said there are various socio-economic programmes and grants targeted to empower women.

Lutiatia said that the women must take advantage of financial support

Delay tablets can help you temporarily skip your period

This may just be the solution many women have been waiting for.
News
1 week ago

Queuing at bus stops is a key factor in the promotion of sexual harassment.
News
1 week ago
WATCH: The latest videos from the Star
by SHABAN OMAR
Coast
17 June 2022 - 01:02