He pledges to govern on four pillars: fairness, equity, transparency and capacity building. 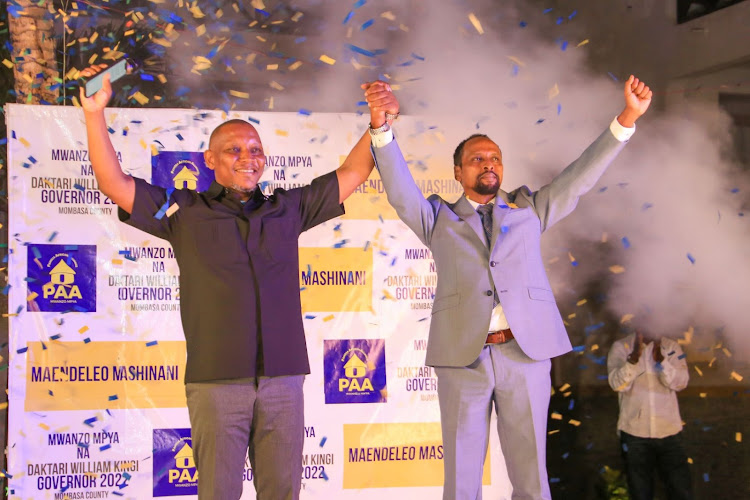 Mombasa governor aspirant William Kingi on Saturday launched his manifesto and unveiled his running mate to help him deliver on it.

Kingi said his administration, should he succeed Governor Hassan Joho, will be anchored on the four principal tenets of fairness, equity, transparency and capacity building of the people and institutions.

These, he said, will enhance the economic growth and sustainable development of Mombasa and chose Amin Roble Jaman to help him implement it.

Roble is a graduate of Cranfield University in the UK and holds a Masters degree in Air Transport Management.

“Born and raised in Kilifi and Mombasa, he is widely familiar with the social and economic affairs of the wider Coast region,” according to Kingi, who unveiled him at the Nyali Resort.

Kingi said Roble has many years’ experience in the corporate world, having worked at senior management levels in various companies, including Silverstone Air Services.

Roble has also worked in Tanzania, both as a senior manager and consultant in hotel and business management.

He has an in-depth understanding of the tourism industry, trade and commerce, and has also taught part time at university level.

“He complements my experience in academia and government with hands on knowledge of business. He is well versed with the shipping sector having worked in the sector for years," Kingi said.

"His international training also broadens our joint perspective in improving the functioning of our county.”

Roble said it is a big honour for him to be picked as Kingi’s running mate.

“I promise that I will work with him. We share the same vision for Mombasa. He knows how I work. Our characters are very similar,” Roble said.

“He [Kingi] knows the strengths, the weaknesses, the problems and has had the opportunities to discuss possible solutions in the five years that he’s been the deputy governor.

“Now it is time to put him in the driving seat so that he can transform this county into the Mombasa that it used to be. We all deserve that."

Kingi said they will reorganise and improve the governance structure under the four principal tenets his administration will work under.

He said for Mombasa to function, the governance structure must be redone.

“Throwing in more money into projects and programmes without reworking the governance structure of Mombasa is tantamount throwing good money away,” Kingi said.

He further said government operations, programmes and policies must operate and revolve around the four pillars.

The governor hopeful said Mombasa, as a port city, should have prospered more than it has.

“We have had devolved units for 10 years now, but still the same problems of poverty, disease and ignorance persist,” he said.

Research done on the three issues have come up with solutions, but implementation of the solutions have been a major challenge, Kingi said.

He said the lack of proper governance and issues of corruption have made the county not deliver to its people.

The governor hopeful said the major undoing is that people, including businessmen and the academia, have given up on Mombasa and become hopeless.

“We should get out of that space and take up our rightful place in transforming Mombasa brick by brick and I believe we have the wherewithal to do it,”  he said.

He said Mombasa needs a major reboot after the SGR greatly affected the transport and logistics sector in Mombasa, where 10,000 direct jobs were lost in 2018.

On the fairness pillar, he said his administration will be inclusive and participatory and will take services to the people.

The ward will be his unit of planning so as to bring power to the grassroots. “So, instead of the people of Mombasa coming to get services from offices in town, we will bring the government where the people are.”

He said his administration will have departments in government represented at the ward level and the budget and planning process will be participatory.

“It will not be this mediocre participation. It will be real participation of the people in the development planning and budget process,” Kingi said

On the equity pillar, he said lives and livelihood will be an important factor to consider for his administration, adding that focus has been on the infrastructure while forgetting the people.

“We must consider the people at the grassroots. We must look at small and medium enterprises and support them more,” he said.

He proposed to scrap the revolving fund and replace it with a Small Enterprise Fund into which he will be investing Sh1 billion each year.

The fund will focus on small businesses, especially those run by youth, women and people with disability, adding that it will be managed by a financial institution of repute, which the county will partner with.

“We don’t want political interference. It will be managed in a very effective and efficient way,” he said.

“Each subcounty must have a proper hospital so as to decongest the Coast General Teaching and Referral Hospital,” Kingi said.

Mombasa gets 40,000 cubic metres of water daily from Mzima Springs in Taita Taveta, Tiwi Boreholes in Kwale and Baricho waterworks in Kilifi, against a demand of more than 100,000 cubic metres.

Out of these, 50 per cent of it is non-revenue water meaning it gets lost through pipe leaks and money business by cartels.

“So we only get about 20,000 cubic metres of water for 1.2 million people, who are permanently in Mombasa and another 700,000 migratory people daily. That is not enough,” he said.

The governor aspirant said they will reduce the non-revenue water by cutting off the water cartels in Mombasa.

“The corruption in the water sector will be a thing of the past. So, those involved in water business in corrupt ways, your days are numbered,” Kingi said.

He further said they will focus on desalination of the ocean water and water aquifers to increase water supply to residents.

On waste management, he said that it will be devolved to the subcounty level.

He said he will bring in investors and reduce the garbage that goes to dumpsite, through recycling and turning waste to energy.

“There are investors who have shown interest and we have had discussions with them but I think there has not been that goodwill to engage them," Kingi said.

“In my government that will change. We will create a good environment for investors to come and set up shop here in Mombasa.”

On the transparency pillar, he said his government will be transparent by ensuring each ward and subcounty has representative development committees to vet plans and actions of the government.

Outsider stakeholders will be in the committees and will have to countersign completion documents to ensure all county projects are properly done before payment is made to the contractors.

This, he said, will eliminate ghost projects.

On the capacity building of people and institutions pillar, he said he will look to build the agricultural capacity of the county.

He said Mombasa gets nothing for agriculture from the National Treasury yet it has enough land to produce food for all its residents if properly utilised.

Kingi said at Kongowea market, Sh35 million exchange hands daily and most of the food being traded there, about 80 per cent, comes from upcountry.

“We must start thinking of producing food in Mombasa which will make food cheaper for residents,” he said.

The Blue Economy is an untapped area which his government will fully explore and help benefit Mombasa people, he said.

He said Mombasa has three county vocational training centre in Mwakirunge, Likoni and Kisauni, which are not very well equipped.

“In the first two years, we will have a vocational training centre in each of the six subcounties in Mombasa and these will be well equipped.”

He said the courses to be offered will be those in demand in the market. 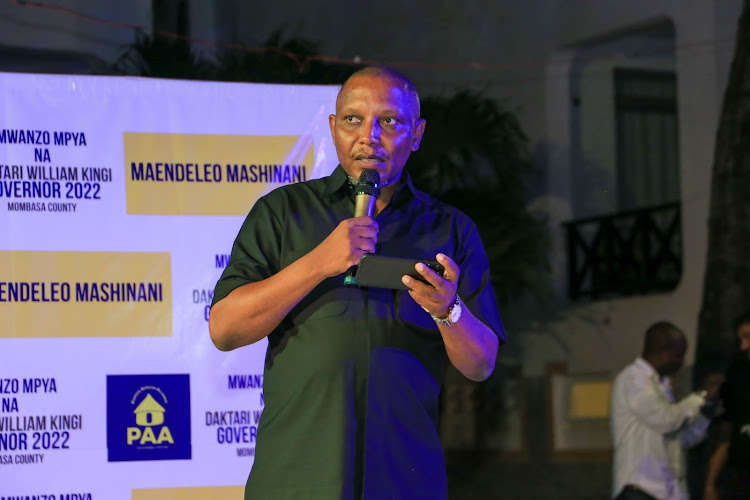 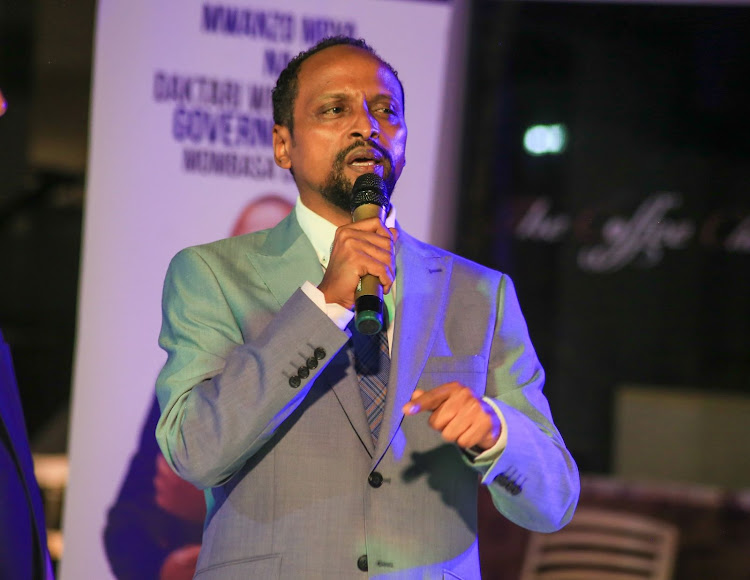 Analysts at the Coast now say the governor race is for Nassir to lose.
Counties
7 months ago

I will still be on ballot, Sonko says after IEBC disqualification

The former Nyali MP is making a second attempt on the governor's seat
Counties
5 months ago
Post a comment
WATCH: The latest videos from the Star
by BRIAN OTIENO Correspondent, Coast Region
Coast
05 June 2022 - 22:00
Read The E-Paper