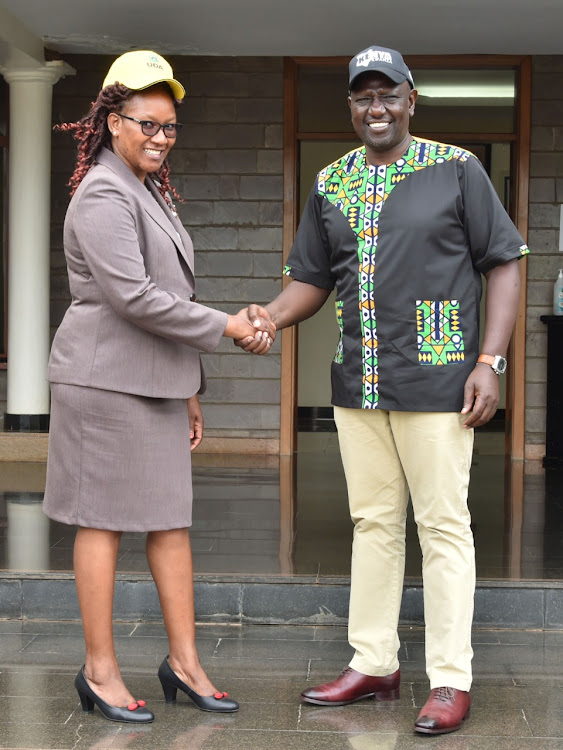 POLITICAL RE-ALLIGNMENTS: Selina Maitha, who was Suleiman Shahbal’s running mate, is welcomed to the United Democratic Alliance party by Deputy President William Ruto at his Karen residence in Nairobi on Monday, May 9.
Image: DPPS

Selina, who is a sister to the former powerful Cabinet minister and Kisauni MP Karisa Maitha, was welcomed to the party by Deputy President William Ruto at his official Karen residence on Monday.

Selina, a decorated public servant with more than 20 years’ experience, was picked by Shahbal as his deputy on March 23.

She resigned from public service on February and was unveiled as Shahbal's running mate at their Majaoni home in Kisauni constituency.

The move is seen as a dent to the Azimio La Umoja-One Kenya coalition in Mombasa.

Selina is from the Mijikenda, which is the single largest voting bloc in Mombasa. She was touted to bring the women and the Mijikenda votes into Shahbal’s camp.

However, on April 17, Shahbal stepped down from the race in favour of Mvita MP Abdulswamad Nassir after President Uhuru Kenyatta and ODM leader Raila Odinga brokered the deal. Shahbal’s decision got his supporters by surprise.

About three weeks later, Selina has decamped to DP Ruto’s camp, which has fronted former Mombasa Senator Hassan Omar as its gubernatorial flag bearer in Mombasa.

Ruto said Selina’s move is a big boost to the Kenya Kwanza team in Mombasa.

“Selina and his key lieutenants joined our team to strengthen our coalition’s grassroots support and bring genuine change to Mombasa,” Ruto said in a statement.

It is likely that Selina will be picked to deputise Omar, who will be taking a second shot at the governor seat, after he came a distant third in the 2017 general election.

“We are still negotiating to see, which position she will be given. What I’m sure of is that she will be given a substantially big position,” an official who accompanied her to Nairobi said.

Selina could not be reached for a comment as calls made to her by the Star went unanswered.

In the 2013 and 2017 general elections, Mombasa Governor Hassan Joho retained his seat while Shahbal emerged second at both attempts.

Ahead of this year's August general election, Shahbal had amassed a huge following before he backed off from the race in support of Nassir.

Last week, Joho pleaded with Shahbal to ensure they merge his team with Nassir's, so that Azimio can become a formidable force in Mombasa.

This is especially after former Nairobi Governor Mike Sonko, who enjoys a euphoric following, declared he will run for Mombasa governor.

Sonko’s entry into the race has already sent shockwaves in the Azimio team.

Shahbal’s team has also been caught by surprise by Selina’s sudden move.

As late as last week, Selina had attended some of the planning meetings to join Nassir's team.

In a statement to newsrooms, Shahbal said he respects Selina’s decision on her new political affiliation.

“I want to state clearly that this was her personal decision and doesn't reflect my position and that of my team.

"My team and I and the overwhelming majority of Mombasa residents remain firmly behind Azimio and our support for our party leader Raila is unshaken,” he said.

Shahbal said he will be at the forefront of the Azimio campaigns at the local and national levels to ensure they form the next government.

“This week, I will be part of the Azimio La Umoja team taking our campaigns down the Coast region. We are winning this election,” he said.

“Whatever she does with her life, that’s her personal decision and we respect it. This, however, has nothing to do with Shahbal and his campaign team,” he said.

Abdulrahman said Selina did not consult them before making her decision to join UDA.

He said Selina was present at a joint secretariat meeting of Nassir and Shahbal’s campaign teams, last week.

“Her move has caught all of us by surprise. She was present during the first meeting we held as we prepared to merge Shabal and Nassir’s secretariats. She did not hint at leaving,” Abdulrahman said.

Nassir and Shahbal’s team have already had three meetings.

The Shahbal’s campaign centre in Nyali will be transformed to host the Azimio La Umoja secretariat in Mombasa.

He says he will bring three water boozers per week in each of the six subcounties to deal with water problem.
Counties
3 weeks ago

Says Wiper leader is out to bring problems within Azimio la Umoja One Kenya Alliance.
Coast - Page 25
3 weeks ago

The board said it will communicate the outcome of the consultations
News
1 month ago
“WATCH: The latest videos from the Star”
by ONYANGO OCHIENG
Coast
09 May 2022 - 22:00