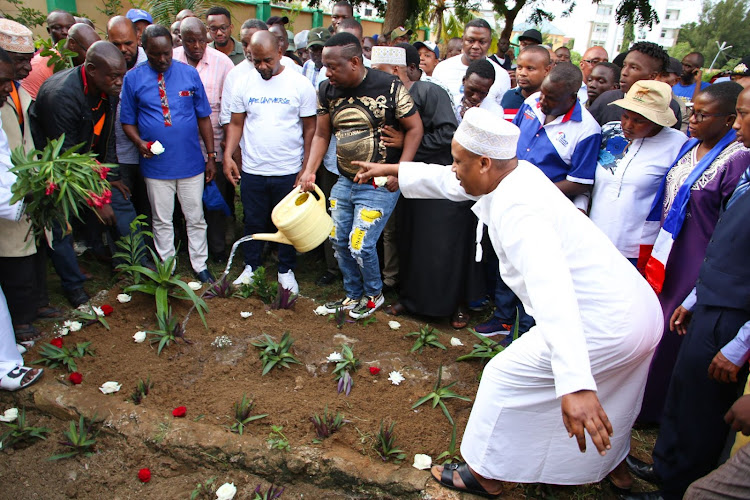 Lamu elders have summoned a man who allegedly ‘killed’ his own mother in a statement on social media.

This is after Sonko on Friday visited his mother Saumu Mukami Mbuvi’s grave at the Kikowani Muslim Cemetery.

Sonko, who was accompanied by Wiper leader Kalonzo Musyoka and his running mate Kisauni MP Ali Mbogo, said his mother was laid to rest there in 1997.

The Friday evening visit was meant to send a statement that Sonko is a bona fide Mombasa resident and not an outsider as claimed by his opponents.

Mombasa Governor Hassan Joho, who has since thrown his weight behind Mvita MP Abdulswamad Nassir, on May 2 said Mombasa cannot be led by outsiders.

However, Sonko’s supporters including former nominated Senator Emma Mbura said since his mother Saumu was from the Digo community, Sonko who was born in Majengo in Mombasa, becomes a native automatically.

Aboud on Saturday said Sonko and his entourage used the wrong grave for their political show.

“This is my mother Mariam Ali’s grave. She was buried here seven years ago,” he said.

He cautioned Sonko against seeking votes using graves saying it is sad and unfortunate.

“Let Sonko look for his mother’s grave. It is not this one,” a tearful Aboud said.

He said according to Islam, the dead resting in graves should not be disturbed.

Aboud said Sonko’s visit with his entourage amounted to disturbing the dead. 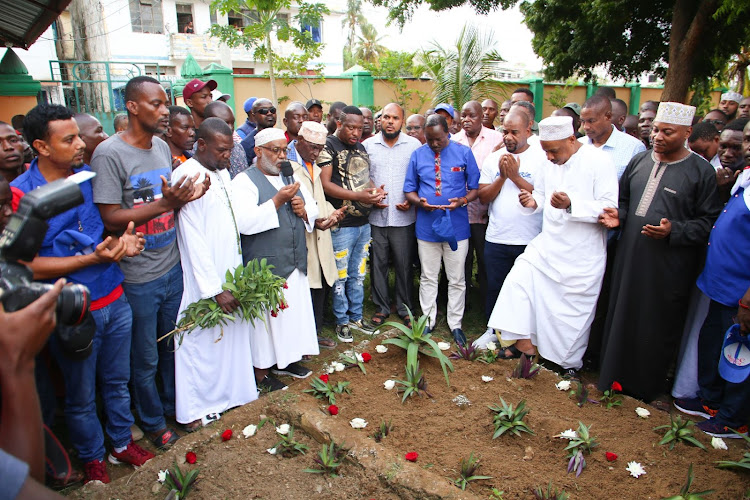 He said Aboud’s mother is still alive and in Lamu.

“Action will be taken against him. They have called his family and he has been warned,” Badway said on phone.

He said the elders want Aboud to issue a corrective statement and explain why he made the statement knowing well that it is wrong.

“His mother is a very old lady in Lamu. We can take the media to her right now,” Badawy said.

The Lamu elders also asked Sonko to make a visit to the archipelago so they can give him their blessings.

When contacted, Aboud denied he is the one who issued the statement.

“You must have the wrong number,” he said, before switching off his phone.

Kanu’s Ayub Hassan, a youth leader, said in Islam, one grave can contain up to 40 bodies so long as they are of the same gender.

He said it is possible that both Aboud’s and Sonko’s mother are buried in the same grave.

“Even he, when he dies, might be buried in a grave that somebody else was buried,” Hassan said.

He said lack of space also contributes to the matter.

Mbura said Mombasa needs change, which, according to her, only Sonko can bring.

She said Mombasa is under a firm grip of a clique of powerful families that want to control the economic, social and political policies of the county.

“Sonko has come to put out a fire that we as the Mijikenda, who are the majority in Mombasa, have failed to put out,” Mbura said in a statement.

On Sunday, in Jomvu constituency, Kisauni MP Ali Mbogo said Mombasa residents have over the years been used and dumped by political projects. “We must break the yokes of slavery.”

He said Nassir is the project of Governor Joho and is being fronted to help continue the agenda of the Joho family.

Nassir has since denied he is anyone’s project saying instead he is the project of the people of Mombasa.

“I have been a leader in Mvita for more than 10 years. There is a reason for that. I am the people’s project, not any individual’s project,” Nassir said in April.

Mbogo said his interest has been to wrest Mombasa from the grip of cartels and tycoons, who only serve their own selfish interests instead of those of residents.

He said change will not come easily and it will take the unity of Mombasa people to achieve it.

“We want to use our resources to empower ourselves. We want to turn the ocean water into drinkable water through desalination because Mombasa has a big shortage of clean drinking water,” Mbogo said. 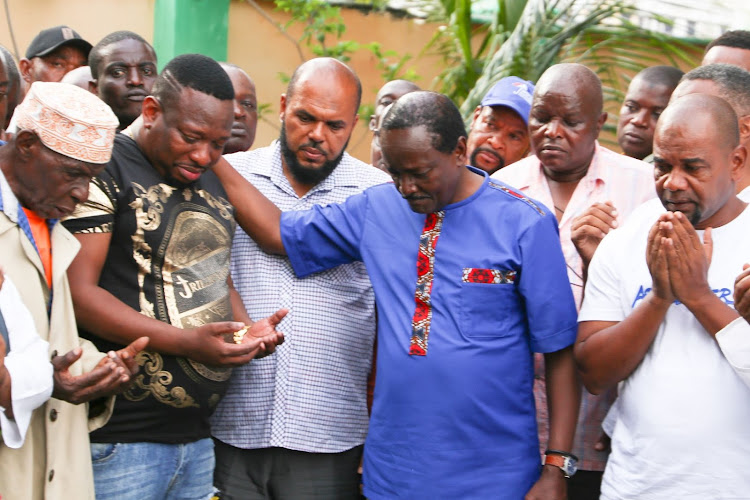 GRIEVING: Wiper leader Kalonzo Musyoka consoles a weeping Mike Sonko at his mother's grave at the Kikowani Cemetery in Mombasa on Friday, May 6.
Image: JOHN CHESOLI

A member of the aggrieved family is heard telling Sonko to look for his mother´s grave elsewhere.
News
2 weeks ago

While the images are not manipulated, they are not of Wednesday’s event.
News
1 month ago

They accused the former Nairobi governor of being disrespectful; they have given him seven days ultimatum
Counties
2 weeks ago
“WATCH: The latest videos from the Star”
by BRIAN OTIENO Correspondent, Coast Region
Coast
09 May 2022 - 22:00