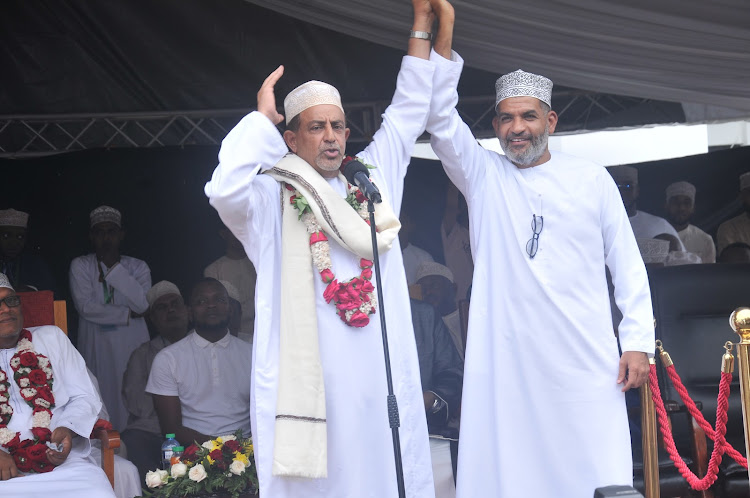 At least three people have been fronted as possible running mate for Mvita MP Abdulswamad Nassir, who is eyeing the Mombasa governor seat.

Nassir’s candidature got a boost two weeks ago when his arch-rival businessman Suleiman Shahbal stepped down in his favour.

Before stepping down, Shahbal had already unveiled his running mate, Selina Maitha, a sister to the once powerful Cabinet Minister from the Coast, Karisa Maitha (deceased).

On Thursday, several sources hinted to the Star that Nassir might settle on Barbara Ngome, Francis Thoya, or Joab Tumbo.

Ngome, who works at Mombasa Governor Hassan Joho’s office, is the current leader of the Governor’s Young Leaders Programme.

She is 33 years old and has worked for Joho since he came into office in 2013.

Thoya, a former journalist, served in Joho’s administration in different capacities until 2019 when he left to join the United Nations.

Towards the 2017 general election, after Joho fell out with former Mombasa Deputy Governor Hazel Katana, Thoya was touted as her (Katana’s) possible replacement.

However, he felt short-changed when Dr William Kingi, who was a lecturer at Technical University of Mombasa, was picked at the last minute.

In February 2019, Thoya’s term as county secretary came to an end and Tumbo, who was Joho’s chief of staff, was appointed in acting capacity.

Tumbo, who is still serving as the county secretary, has also served in Joho’s administration since 2013 in different capacities.

According to insiders, if Nassir is to settle on a Mijikenda, because they are the single largest voting bloc in Mombasa, he will either settle for Ngome or Thoya.

“There is an issue of gender. I can confirm to you that Nassir will settle on a Mijikenda woman for his running mate,” a source said.

The source said the running mate also needs to be a Christian because Nassir is a Muslim.

“A Mijikenda woman who is also a Christian will be ideal to consolidate the votes of the Mijikenda, women and also the Christian voters,” the source said.

Ngome could not be reached for comment as calls made to her by the Star went unanswered, however, sources say “she is also crossing her fingers.”

However, there are those who feel that Thoya, who has been in political circles for a while, will make a good candidate.

“Thoya was among those who were to deputise Joho in 2017. He has a good ground network and understands the Mombasa voting pattern,” a senior official in the county said.

However, there is also a notion about the voters from upcountry, who for a long time feel they have been sidelined by Mombasa county administration.

Despite being among the largest voting bloc, Luos, Luhyas and Kambas said they were intentionally left out of Joho’s government.

Towards the end of last year, the Luos started complaining they were unceremoniously kicked out of key positions in Joho’s government.

They claimed former Mombasa speaker Thaddeus Rajwayi and a host of Luo MCAs who served between 2013 and 2017 were kicked out of the assembly positions and others voted out in an elaborate scheme plotted by Joho’s team.

The Luo community last year held a series of meetings with Shahbal and Nassir to demand inclusion in the next county government after the August 9 General Election.

The arrival of former Nairobi governor Mike Sonko in Mombasa politics has also forced the Nassir team back to the drawing board because Sonko attracts upcountry voters.

“If the issues of Luo and upcountry voters are taken into consideration, then Tumbo is better placed to be the next deputy governor,” the source said.

However, in a phone interview with the Star, Tumbo said he is not among those who are being fronted for the deputy governor position.

“I cannot discuss the issue of the running mate. That is the preserve of the governor candidate in line with his manifesto. Currently, I still have a huge responsibility as county secretary and I'm focused on that office," he said.

On Thursday evening, Nassir was expected to launch his manifesto. However, reports were rife he was to also unveil his running mate.

“What I know is that Nassir is expected to launch his manifesto. If it was a running mate, then the event will be during the day not in the evening,” a person privy to the plans said.

According to insiders, the meeting was to discuss the possible merger of Nassir and Shahbal’s secretariats, choice of the running mate and the manifesto, so that Nassir becomes a formidable force in Mombasa.

On Tuesday Joho had said the strategy of working as a team will ensure Mombasa is not taken away by ‘outsiders.’

Sonko, who is seen as a spoiler, has vowed to wrestle the seat from Joho’s control.

“The Tamarind meeting was a follow up to what Joho said on Tuesday during the Eid Baraza. The meeting was mainly about the operations on how they will forge ahead as one team to ensure Nassir win the seat by a landslide,” an official in Joho’s team said.

He says he will bring three water boozers per week in each of the six subcounties to deal with water problem.
Counties
2 weeks ago
“WATCH: The latest videos from the Star”
by BY ONYANGO OCHIENG
Coast
05 May 2022 - 22:00