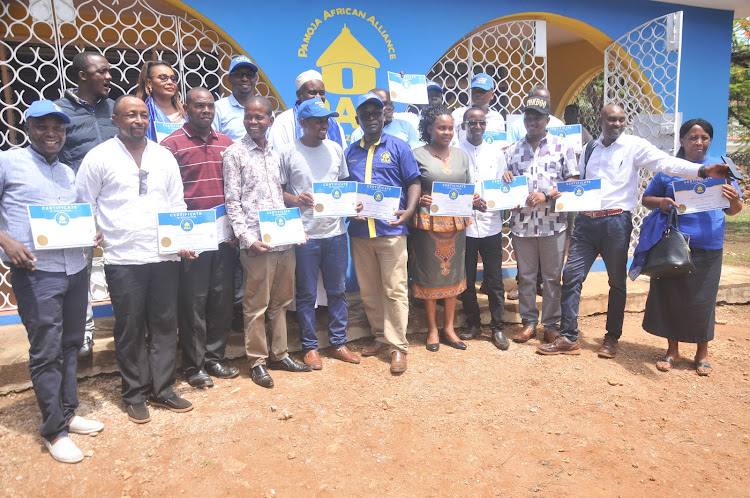 Pamoja Africa Alliance aspirants after they were issued with certificates in Mombasa on Wednesday
Image: LABAN WALLOGA

Pamoja African Alliance party has told parties in the coastal region to brace for a big battle in the August 9 polls.

The certificates were issued by party chairman Ibrahim Khamis at the PAA's headquarters in Mombasa.

"We are still a young party so we had to do this exercise carefully. That's why we had primaries in some areas and consensus in others,"  Khamis said.

Khamis further said the party was keen to engage ODM aspirants who lost in the party primaries.

"We are already in talks with them and we shall bring them into our camp soon so that we can hit the ground running together," he said.

Besides fielding aspirants in the six coastal counties, PAA also has aspirants in Busia and Makueni counties.

Michael Mwadime, an aspiring MP for Voi said the party will be a game-changer and a major determinant in the Coast politics.

Mwadime was given a direct ticket.

"I would like to thank Governor Kingi for creating this party. For a long time we have been seen as swing votes. We have not been respected but this time they will be shocked," Mwadime said.

The youthful aspirant said PAA will lead in the Coast and give the people an identity in national politics.

On Tuesday chaos erupted in some polling stations and the exercise had to be called off.
Counties
7 months ago

Kithi will fight it out with ODM’s Gideon Mungaro and Malindi MP Aisha Jumwa of UDA.
News
7 months ago

In Mnarani, an aspirant took off with ballot boxes; in Ganze, voting was stopped after chaos erupted.
Counties
7 months ago