Say it was unlawful to pick Samboja without involving Rachael Mwakazi

• They faulted the President Uhuru Kenyatta-led party for denying aspirants the opportunity to compete against each other.

• On Saturday, party National Elections Board chairman Stephen Wandeto issued Governor Samboja a nomination certificate to defend his seat in the August 9 polls. 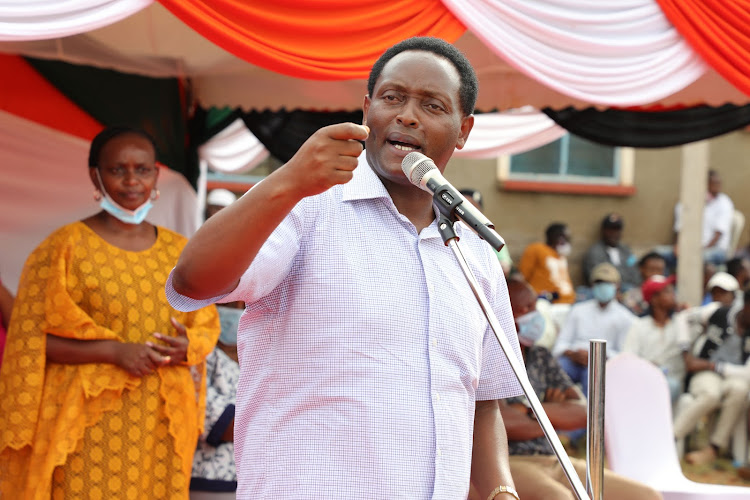 The six aspirants on Sunday said it was unlawful to pick Samboja without involving Rachael Mwakazi. She was competing with Samboja for the Jubilee ticket.

In a statement, the aspirants said they were disappointed with Jubilee’s approach to handling nominations in the county.

“As people of Taita Taveta county, we are greatly aggrieved by Jubilee’s decision to nominate the incumbent without considering another member of the Jubilee party,” the statement reads.

They faulted the President Uhuru Kenyatta-led party for denying aspirants the opportunity to compete against each other.

“Their action stems from impunity which outrightly dispossesses the people of Taita Taveta county, their right to elect leaders of their choice and deliberately deny them effective representation,” they said.

On Saturday, party National Elections Board chairman Stephen Wandeto issued Governor Samboja a nomination certificate to defend his seat in the August 9 polls.

The aggrieved aspirants said they will write to the Political Parties Dispute Tribunal to seek their guidance and action on the conduct of the Jubilee Party.

“We will also be moving to court to seek a determination on the eligibility of the incumbent to run for elective office,” they said.

The six candidates are part of 12 candidates who have declared their bid to replace Governor Samboja.

On Sunday, Mwakazi told the Star that she learnt about the issuance of nomination certificates through the media. She said no agreement had been reached.

Mwakazi said that despite paying the required Sh250,000, the party insisted on consensus as opposed to primaries.

“To my shock, no communication was done about the issuance of direct tickets. The party should have opted for primaries, which is more democratic,” Mwakazi said.

She promised to lodge a complaint with the party to have Samboja's nomination certificate cancelled to pave the way for further talks.

Samboja promised to help the party deliver seats in the region.

He has pulled a number of sitting and aspiring MCAs to the Jubilee side, who are helping him coordinate grassroots meetings.

He has teamed up with MCAs Fundi Mwambi (Mbololo), Juma Mwamba (Wusi/Kishamba) and Martha Kenio (nominated).

Others are former Woman Representative Joyce Lay, who is seeking to recapture her seat, and Sagalla MCA Godwin Kilele, who is eyeing the senatorial slot.

He will seek to defend his seat in August using Jubilee ticket.
News
4 months ago

Mwakesi was set to battle it out with former governor John Mruttu in the UDA primaries.
Counties
4 months ago
“WATCH: The latest videos from the Star”
by SOLOMON MUINGI
Coast
18 April 2022 - 22:38