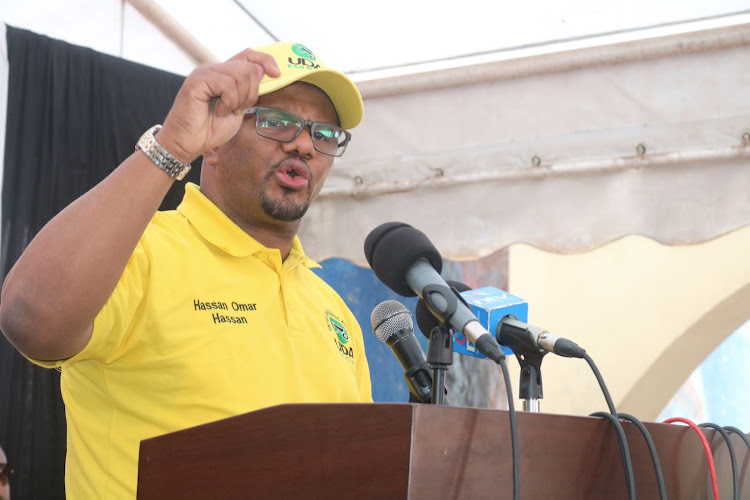 Details of moments before and after shooting of politician Ali Mwatsahu  have emerged as UDA linked the incident to politics.

Mwatsahu, who is one of three UDA aspirants for the Mvita MP seat, was trailed by two cars from the Makupa roundabout, according to sources.

He was alone in the car and according to someone who spoke to him moments after the incident, he had noticed the two cars trailing him.

He was blocked by the two cars at the roundabout about 200 metres from the Technical University of Mombasa.

The attackers sprayed his white Toyota Vanguard with at least 24 bullets, mostly from the driver’s side and in front.

Witnesses say the 60-year-old crawled out of the car and stopped a tuk-tuk which took him to Aga Khan Hospital.

At the hospital, Mwatsahu was drifting in and out of consciousness but is said to have told those who visited, he was attacked because of politics.

“Wametuwai bana. Haya ni maswala ya siasa tu (They have got us. This is just politics),” Mwatsahu said.

Doctors who operated on him for about five hours removed at least 17 bullets from his stomach, hands and legs.

About three others are still lodged in his body, one in the pelvic area, which doctors say is too dangerous to remove immediately.

Samir Omar, the UDA Mombasa coordinator, told the Star it seemed Mwatsahu saw the attackers approach him and wanted to shield himself.

“It was like a desperate attempt to cover himself from the bullets. I am shocked. They wanted him dead,” Samir said.

He said the right hand, which bore the brunt of the bullet was badly damaged and paralysed, according to information they received from doctors.

This details emerged even as former Mombasa Senator Hassan Omar has linked the shooting  to politics.

Omar alleged that the shooting of Mwatsahu was a warning shot aimed at instilling fear in politicians who are not in Azimio la Umoja.

“I believe there is an attempt to intimidate UDA and Kenya Kwanza members to derail our politics,” Omar said at Aga Khan Hospital, where Mwatsahu is undergoing treatment.

“There is a political scheme to scare and hurt certain political activists and politicians allied to UDA."

This was minutes after Interior Cabinet Secretary Fred Matiang’i, who was in Mombasa, warned politicians against issuing statements that are likely to cause tension in the county.

Matiang’i was inspecting operations at the Kenya Coast Guard Service in Liwatoni.

The CS said he will issue a comprehensive statement on the incident later.

By yesterday, Mwatsahu was out of the theatre and was being monitored closely in the ICU.

Police remain tight-lipped on the matter, only saying they are investigating and details will be shared after the investigations yield something tangible to speak about.

“Expect tight security measures before, during and after elections in Mombasa county,” Otieno said.

Mwatsahu has a wife and four children who have camped at the Aga Khan hospital praying for his recovery.

Omar said the incident is one of the many ways that the DCI and other security agents are being used to try and derail the Kenya Kwanza political storm.

“You will see them giving wrong information or misleading the public. On other small issues, like the Raila chopper stoning, you will hear outrageous information with President Uhuru Kenyatta saying Kenya will burn if anything happens to Raila," Omar said.

“The same Uhuru is forgetting they one day tear-gassed the same Raila from the airport to his home, used rubber bullets and killed some of his supporters."

On Sunday, attackers also invaded the house of ODM MCA aspirant Thomas Okari, 38, in Bombaba, Kisii and stabbed him to death.

Okari died in the wee hours of Monday while undergoing treatment in the hospital.

The Nairobi-based businessman had travelled to Kisii from Nairobi on Thursday, to take part in the ODM nominations set for April 7.

Police are yet to establish motive of the attack on the UDA politician.
News
2 months ago