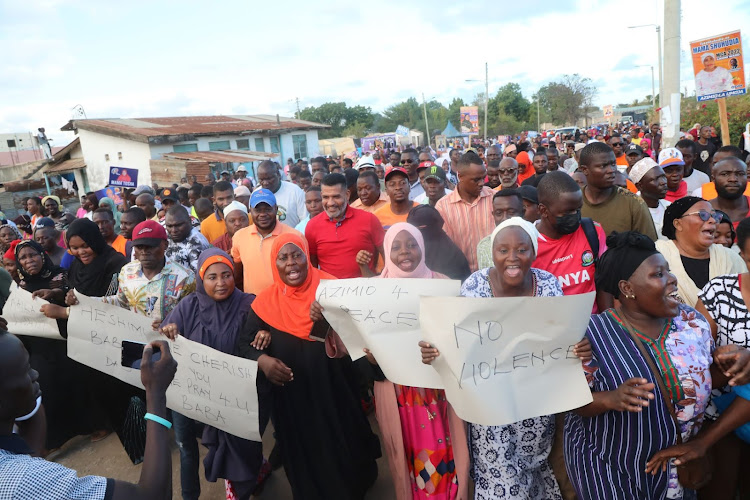 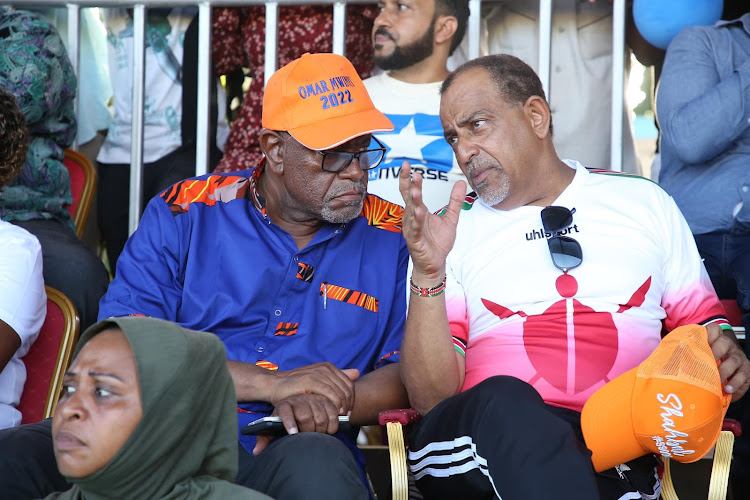 The political matrix in the race for the Mombasa governor seat is getting complicated by the day.

Stakes are high, funds are dwindling and rivals are digging their heels in.

The battle for the ODM ticket to vie for the top county seat between businessman Suleiman Shahbal and Mvita MP Abdulswamad Nassir was among the main reasons for the postponement of the ODM primaries in Kilifi and Mombasa.

ODM National Elections Board chair Catherine Mumma on Saturday said the postponement is to allow room for more consultations and consensus building.

Insiders tell the Star there have been calls for another independent opinion poll to be conducted, with those that have been conducted so far believed to have been doctored in favour of some aspirants.

On Saturday, Nassir said he is ready for another opinion poll claiming he is more popular than Shahbal.

“There is a difference between wealth and love. All of you here have been offered money but refused it and stayed on our side,” said Nassir at his campaign secretariat in Tudor, where he met MCA aspirants allied to him.

However, Shahbal through his aide Idris Abdirahman, on Sunday said Nassir is insincere about the opinion polls.

“If they are more popular, why do they fear going for nomination? They want direct tickets,” Abdirahman said.

Shahbal was set to meet MCA aspirants allied to him at his campaign secretariat in Nyali Sunday midmorning.

Meanwhile, in UDA, aspirants for the Woman Rep, MP and senator seats failed to reach consensus even after Deputy President William Ruto implored upon them to do so.

On March 27, Ruto asked the aspirants to try reach a consensus at the English Point Marina before he and his troops left for the church service at the Jesus Celebration Centre in Bamburi.

“No consensus was reached. Nobody wanted to quit the race in favour of another,”one of the aspirants said.

The party bigwigs then said they would use surveys to determine the best candidates for each position.

“Should a particular candidate beat his closest opponent by more than 10 per cent, they will be given the UDA ticket,” another source in the UDA camp said.

Should this also fail, they will be forced to go for nominations which are set for April 14.

The governor candidate for UDA is former Mombasa senator Hassan Omar, who has no opponent.

Omar has upped his campaigns in the county and has seen his ranking in opinion polls rise.

On Saturday, he met elders in Tononoka and Kiembeni where he sold his agenda.

“I will return the respect of Mombasa people and protect their resources, especially the Mombasa port. These people cannot deceive us again,” said Omar.

Meanwhile, Pamoja African Alliance seems to be the winner in the internal wrangles in ODM.

Mombasa deputy governor William Kingi, who also wants to succeed his boss Joho, has quit the ODM and joined PAA.

Kingi said he saw no fairness in the party.

“I used to speak vehemently about the nominations in ODM. But there was no direction that the party gave that we understood. Some leaders were being favoured.”

He spoke at Burhania Primary School in Buxton on Friday during the launch of the Mombasa Mvita Boda Boda Sacco.

He said the favouritism would deny Mombasa residents the opportunity to elect the leaders they want.

“It then became difficult for me to remain there. For now I am in PAA and will vie for the Mombasa governor seat on the party's ticket,” Kingi said.

However, PAA has an uphill task in breaking the firm grip that ODM has on the county.

Wiper’s Kisauni MP Ali Mbogo is also in the race to succeed Joho.

But with Wiper joining Azimio la Umoja One Kenya alliance, it is not known what will happen next.

“We are still in the race and with Wiper party. We know our opponents fear us and have started spreading propaganda. But we are firmly in the race and we will win,”Mbogo, through his aid Richard Mwasingo, said.

On Saturday, Nassir said he beats Shahbal in all the criteria that the party uses to pick its flagbearers.

These include loyalty to the party, performance, ability to be an asset to the party and not depend on it for campaigns, popularity and integrity.

“When it comes to loyalty, I don’t even know where to start. I don’t know if the others can compete,” Nassir said.

He said he has been religiously paying his dues to the party and has severally been voted as the best performing MP in the county and the country.

“I have never been in court for any integrity issues despite being the chair of the National Assembly Public Investment Committee,” Nassir said.

But Shahbal said the ground speaks louder than words.

“They can say all they want. But we all know who beats the other in all the issues they say,” Abdirahman, Shahbal’s aide, said.

ODM has not give a direct ticket for Mombasa governor seat to anyone.
News
4 months ago

The party on Saturday cancelled party primaries for Mombasa and Kilifi counties.
Coast - Page 25
4 months ago