•  Mwambire said many donors have kept away from the county due to corruption. He said some are asked to bribe some officers for them to be allowed to undertake development projects.

•  Kingi however, dismissed the allegations and said the leaders are being used by their masters who do not want to see the coast region moving in one direction. 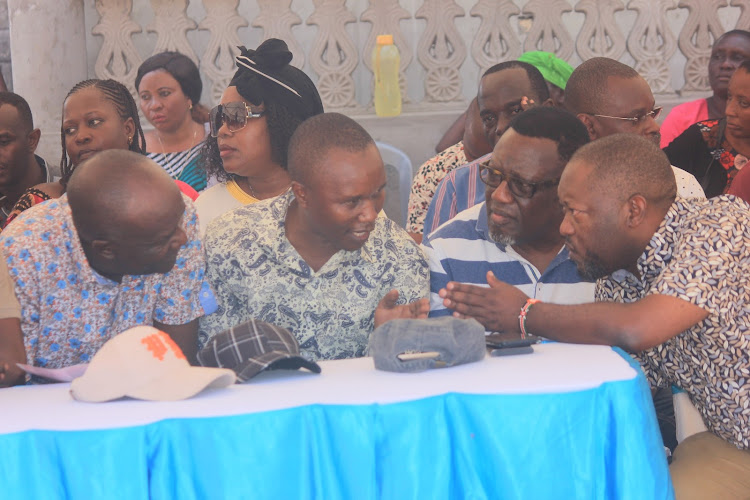 Kilifi Governor Amason Kingi has come under sharp criticism from other leaders who claim he has failed to turn around the fortunes of the county.

The leaders who include four sitting MPs and three governor aspirants wondered why the county is still plagued by many challenges despite receiving more than Sh70 billion in ten years.

The leaders spoke in Kaloleni on Saturday, during the burial of Mary Kahunda, step mother to Kaloleni MP Paul Katana.

They urged Kingi to explain to the Kilifi residents how the billions were utilised.

“Kilifi has received more than Sh70 billion but there is nothing to show for it. All county roads are impassable. Hospitals have no medical supplies," Kamoti said.

"Water is still a problem in all corners of the county. This is shameful. Kingi has failed and he should just retire in peace."

Chonga said it was disgusting that after his failed leadership Kingi is blaming the ODM party for his failures.

The Kilifi south MP, who was recently appointed the ODM deputy national organising secretary said Kingi is the only Coast leader who has benefited more from ODM.

“Kingi was the Magarini MP for five years courtesy of ODM. He has served as governor for two terms through ODM," Chonga said.

"While MP he served in various ministries because of the party but now he is claiming the county underperformed because of ODM. Political parties do not lead, leaders do."

He further said the county never missed its disbursement of funds from the government because the governor was in ODM.

“If you did not deliver it's you and your team not the party. Parties do not build roads,” he said.

Katana said Kingi is trying to remain in power by imposing leaders on the people.

Katana said the line up in Kingi’s Pamoja African Alliance party demonstrates the motive behind the formation of the party.

“If you look at the governor candidate for PAA, he is an advocate who has been doing business with the county and has signed many deals that have sunk the county into trouble," he said.

"The senate aspirant for the party was the chief officer for finance and the Ganze parliamentary aspirant was in charge of roads and water. While in charge of these dockets people suffered. The issue of kickbacks was the order of the day."

He said corruption led to under development of the county. He called on the Ethics and Anti-Corruption Commission to investigate Kingi.

“I still wonder why Kingi is still supporting Raila Odinga, who he is castigating so much. Let him carry his cross and answer to residents on why the county is still in a sorry state while only the lives of his staff has improved,” Katana said.

Mwambire faulted Kingi for failing to consult other leaders in his tenure.

He accused the governor of coercing people to support his party.

Out of the seven elected MPs in Kilifi, only the Magarini MP Michael Kingi, who is the governor’s brother is supporting PAA.

Mwambire said many donors have kept away from the county due to corruption.

He said some are asked to bribe officers for them to be allowed to undertake development projects.

Kingi however, dismissed the allegations and said the leaders are being used by their masters who don't want to see a united coastal region.

Kilifi Deputy Governor Gideon Saburi admitted that the Kingi failed to meet the expectation of the electorate but said he will not dwell on the failures.

“Whatever these MPs have said is true. If I spill the beans here I will be mocking myself too because I am his deputy.," Saburi said.

"We have come up with a liberation movement dubbed Azimio la Mageuzi. We want to make sure we elect a governor who loves the people .”

Saburi is eyeing the governor seat.

Says if no interventions are made soon, the violence might spread and cause tension in the county
Counties
4 months ago

Kithi: PAA to push for return of port services to Mombasa

He is battling at least six other aspirants for Kilifi county’s top seat.
Counties
5 months ago
“WATCH: The latest videos from the Star”
by ELIAS YAA Correspondent, Coast Region
Coast
20 March 2022 - 22:00