•  Kingi’s PAA is currently facing headwinds after six out of the seven sitting MPs in Kilifi county declined to support the party.

•  The only sitting MP who has shown interest in the party is Magarini’s Michael Kingi who is his brother. 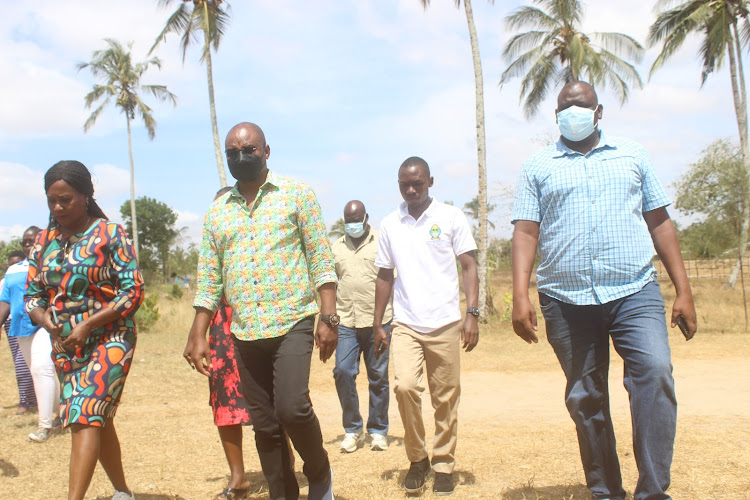 Kilifi Governor Amason Kingi has embarked on a three-week tour of the county to market his Pamoja African Alliance party.

The tour, which doubles as a project inspection visit, will take him to all the seven constituencies.

On Monday and Tuesday, Kingi traversed all the four wards in Rabai constituency.

He is on a charm offensive to disrepute ODM, party which he helped popularise in the 2013 and 2017 elections.

Addressing residents at Chibarani grounds in Ruruma, Kingi said residents should embrace PAA as it carries the vision of the region.

“I sowed the seeds of ODM here in Kilifi county and today, I am here to uproot the trees that sprouted. I am the one who brought the ODM talisman and today, I am cancelling its powers.

"As a region, we have embraced political vehicles with roots from other regions and they have proved useless to us. Let’s get on board PAA where our aspirations are,” he said.

The governor said the lack of a political voice for the region has led to the collapse of the Coast economy.

“I have been in government and I know how it is run. For over 15 years, we have depended on [ODM leader] Raila Odinga to bargain for this region. But what Raila does is to lobby for his region and we get what remains," he said.

Kingi said many jobs at the Kilindini habour have been transferred to the Naivasha Dry Port.

"Our leaders wanted to object the transfer of services but the parties they are affiliated to had a contrary opinion and our leaders had to give in,” he added.

Kingi said he will address the long outstanding land question at the Coast, revive the coast economy and ensure inclusivity in national government.

During the tour, he commissioned the upgrading of 600 metres Bengo to Dr Krapf historical site road to cabro standards.

PAA is already facing headwinds after six out of the seven sitting MPs in Kilifi declined to support the party.

The only sitting MP who has shown interest in the party is Magarini’s Michael Kingi, who is his brother.

He has fronted former staffers in his government as candidates in various positions in the coming general election.

Jumwa is vying for the Kilifi gubernatorial position.

On Wednesday and Thursday Kingi will tour Kaloleni constituency.

The biggest setback for PAA is Kingi’s poor development record, as some residents say they feel the governor has done very little to change the lives of residents.

Ganze and Magarini constituencies have on several instances refused to support the party.

Other parties that signed the agreement include PNU, UPA, UPIA and KUP.
News
7 months ago