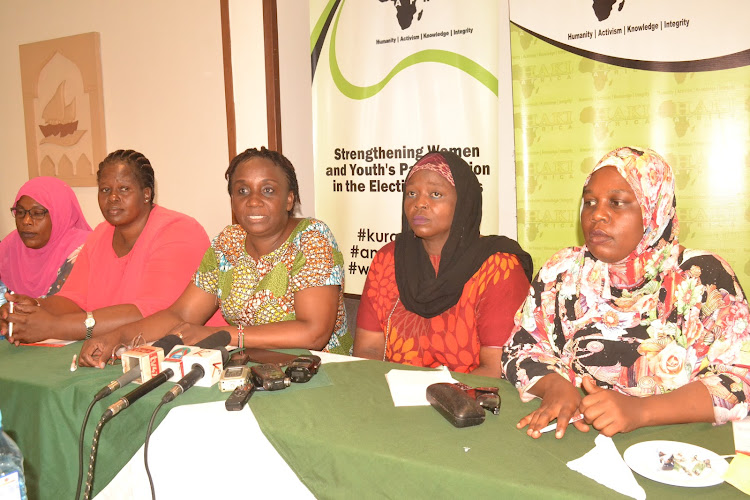 Mombasa women aspiring for political seats have urged the government to provide them with security during political rallies.

The aspirants spoke on Tuesday during a workshop organised by Haki Africa to build on women’s strength in politics.

Kisauni MP aspirant Beatrice Gambo said women in politics have been facing a lot of challenges, especially during political rallies.

“In many instances, women are intimidated during rallies, making it hard for them to address the crowd,” she said.

Gambo, who will be battling with men in the race to succeed MP Ali Mbogo in Kisauni, said security agencies in all 47 counties need to stand with women aspirants.

“If our male counterparts are given two security officers, we should be given four,” Gambo said.

She added that the political parties need to ensure that there are also free and fair nominations, so that women can participate.

“We have new rules that state that if someone fails nominations, they cannot join another political party or run as an independent.

"This will be a hard task, especially for women aspirants. Therefore, political parties should provide a level playing field for both men and women,” Gambo said.

Khadija Muhsin, who has declared interest in the Mvita MP seat, said she had unsuccessfully contested for woman representative seat in the last two general elections.

She urged the coast regional commander to provide security to all women aspirants in the coastal region.

“Kenya has been behind for a long time, a woman’s place is known to be in the kitchen, but that has to change. Men should stop paying youths to interfere with our political rallies,” she said.

Lack of financial muscles is also a challenge for many women aspirants.

Miraj Abdullahi, who is seeking to be the next Mombasa woman representative, said there is need for women to get support for their campaign.

She said most women aspirants have never been employed before.

“We urge stakeholders to open doors for us and support us. We have people who have been in the system for a long time, unlike us who are new and that is why we are asking for financial support,” Abdullahi said.

She said only a woman can bring peace in the nation if given the leadership opportunity.

The aspirant urged political parties to support women by removing the nomination fee.

“About 90 per cent of women have been forced to step down due to lack of finances. Political parties should help them by removing the nomination fee,” she said.

The ladies also complained that sometimes they are sexually harassed by fellow male politicians due to lack of financial muscle.

Kipevu MCA aspirant, Mariam Juma said women qualify to be leaders and do not need to give into sexual demands to be offered opportunities.

“Leadership is all about skills and we believe that we have the capabilities. The issue of sexual harassment should stop. We are not ready to be used just because we do not have money,” she said.

Juma said as women leaders they will move door to door campaigning.

Haki Africa programme assistant Ali Fujo urged women in politics to report any violation cases that they will experience during campaigns.

"We have received complains of violation cases from the aspirants and going forward, we will take action against any person violating the rights of voters and political aspirants," he said.

Kenya Power gave the residents until Thursday to move out.
Counties
4 months ago

Commission for Justice and Human Rights says there was no public participation, advertisement, shortlisting and interviews
Counties
4 months ago

They are afraid, another disaster is about to hit the semi-arid region due to destruction by residents
Counties
4 months ago
“WATCH: The latest videos from the Star”
by Aura Ruth
Coast
16 February 2022 - 22:00