The party officials said they are yet to sign a deal with any presidential leader.

• The party’s spokesperson Lucas Maitha said they are going to support a presidential candidate who will demonstrate the ability to solve coastal issues.

• Raila has constituted a team, which is led by a coastal MP to draft issues that PAA want to be addressed before they meet for a talk. 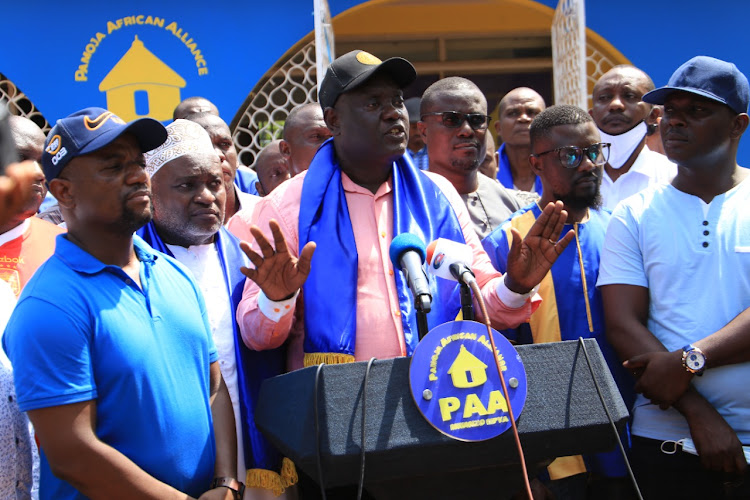 The Pamoja African Alliance Party, which is affiliated with Kilifi Governor Amason Kingi, has said it is open for negotiations with all presidential candidates including Deputy President William Ruto.

The party senior officials on Friday said ODM leader Raila Odinga has already approached them for cooperation, but they are yet to sign any agreements.

Speaking at the party headquarters in Mombasa after meeting candidates for various posts in the region, the party’s spokesperson Lucas Maitha said they are going to support a presidential candidate, who will demonstrate the ability to solve coastal issues.

“We have been in contact with Odinga simply because from the onset he made it clear that the Azimio la Umoja movement was open to talks with all formations. At that time, the DP had closed the window saying all parties were village parties except his UDA party,” said Maitha.

He added: “We shunned him (Ruto), but recently we have seen that he has changed tune and has accommodated ANC and Ford Kenya parties and is ready to accommodate more, he hasn’t contacted us yet but I know he will come.”

Maitha said that their talks with Odinga do not imply that they have settled on him as PAA’s preferred presidential candidate.

“We are yet to settle on him as our presidential candidate, but he has shown a lot of interest. In fact, Raila has constituted a team, which is led by a coastal MP to draft issues that PAA want to be addressed before we meet to talk,” he said.

He said that as leaders from the region they want the revival of the region’s economy by ensuring that Port services are returned back to Mombasa.

They also want the next government to ensure that all collapsed industries in the region are revived just like it has been happening in other regions in the country to ensure the region’s economy bounces back.

Maitha said that the region was tired of the usual rhetoric from presidential candidates every electioneering year that they were going to deal with the squatter and land issue that has bedevilled the region for years,

“We want a special fund to be established through an Act of parliament so that in every budgetary cycle, some money will be allocated to buy absentee landlord lands so that locals who have developed themselves there are given title deeds,” he said.

He reiterated that the party was going to field candidates in all positions in the country except the presidency and as such, PAA was ready to trade off the presidential votes.

“We are telling the world that come August 2022 when the national assembly and the senate are being constituted, you are going to see legislatures donning our blue colours being sworn into office,” he said.

Post a comment
WATCH: The latest videos from the Star
by ONYANGO OCHIENG
Coast
05 February 2022 - 10:58
Read The E-Paper