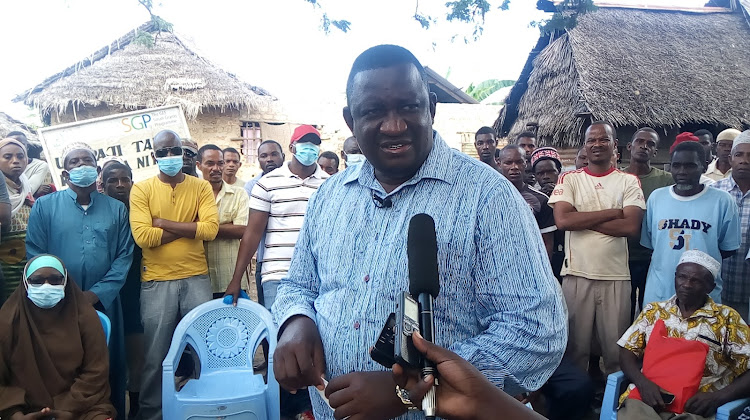 Over 200 families living in Mwatate, Kwale county, have vowed to stay put in a disputed land said to belong to the Kenya Agricultural and Livestock Research Organisation.

While appearing before the National Land Commission Alternative Dispute Resolution Technical team, the residents said they are the original inhabitants of the land measuring about 351 acres since the colonial government days.

About 14 heads of families representing the community have been enlisted in the matter.

The session had to be conducted in Swahili because most of the enlisted parties were aged and said they did not go to school and so could not understand English.

Kalro said they acquired the land from the government in 1949 for agricultural research purposes.

Appearing for Kalro, the institution’s deputy legal officer Brenda Wahiga submitted to the commission that at the time they received the parcel registered as CR. No. 34236, no title was issued to them.

The institution claimed that it was issued with an allotment letter in December 16, 1996 after paying the required rates and later received a title of lease for a period of 99 years running from December 1997.

The institution at that time fenced 74.13 acres that they put in use immediately before its operations were temporarily halted and transferred to Mtwapa in Kilifi county. The remaining 271.816 is said to be occupied by the community.

“Trouble began in 1983 over land, at that time, the institution wrote to the district commissioner to come and address the issue of the squatters that had invaded our land,” she said.

Wahiga submitted that they have had a number of engagements with the community and that they had even agreed to vacate the area.

A ministerial circular issued in 2005, directed that all government land acquired illegally should be repossessed and given back to the original government institutions.

“We did a search to identify the families living in the area, we established that most of them inherited the land from their parents, however none of them could identify the burial sites for their loved ones as they claimed to have buried them there,” she added.

In 2016, the lands commission conducted a survey which established that the land was registered to Kalro, therefore it could not declare the area a settlement scheme.

The last survey conducted in November last year also revealed that the land was registered under the institution’s name.

However, the residents disputed Kalro claims over the land saying they have lived there even before the institution was established.

Omar Saidi Raphano, a 74-year-old resident of the area, told the commission that they were not going to move from the area, adding that at no point had they agreed to move out of the land.

He questioned how the land was issued to Kalro saying their parents were already living in the area when the colonial government is said to have allocated the  land to the institution.

He added that they were peaceful people and have lived in peace with the institution over the years.

He wondered why the sessions were being conducted in Mombasa yet the land in question was in Kwale, calling on the commission to do a site visit and bring their surveyors.

“If they say they have a title as they claim, then why did they allow the 2016 survey to be conducted?” he asked.

His sentiments were echoed by 71-year-old Ali Vidzo Juma who said trouble began soon after independence in 1963.

He asked the commission to treat the matter as a historical land injustice saying that the institutions was laying claim over their side of the land which they have lived on for long and built their homesteads.

“We were hopeful that the 2016 survey was going to ensure we get titles for our lands, we even showed the surveyors our boundaries for each homestead, but to date, no communication has come forth,” he said.

Kwale Lands Executive Saumu Beja said the matter was a historical injustice, adding that such matters were common in the county.

“This is a case of land historical injustice, we have so many cases of this nature in the county. The people have no issue with Kalro, we hope the commission will be able to solve the issue amicably,” she said.

The team will be back next month and is expected to visit the site on February 23.

Judge is among 47 individuals and companies embroiled in 14.7 acres dispute with Nyali Primary School
Counties
3 months ago

They want ranchers investigated for their role in the recent killings
Counties
4 months ago
by ONYANGO OCHIENG
Coast
24 January 2022 - 22:00