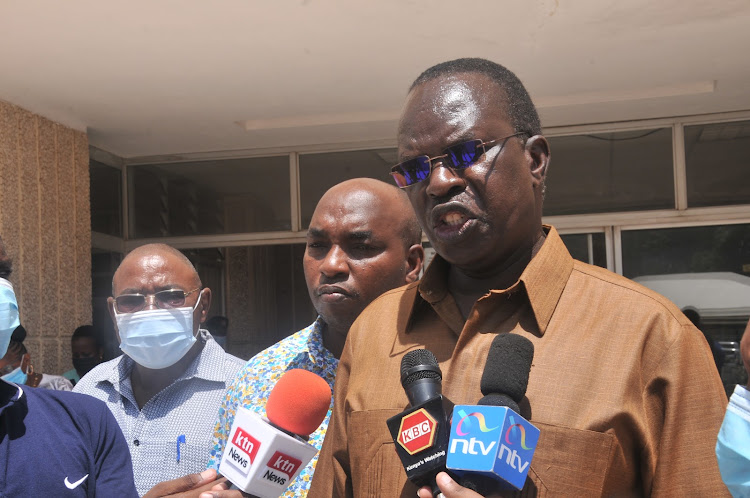 The national government will not rest until those behind the recent killings in Lamu are brought to book, Coast regional commissioner John Elungata has said.

At least 13 people, including four elite GSU officers, have been killed within a span of one week in Lamu West constituency.

The Somali-based al Shabaab militants are being blamed for the recent wave of attacks in the region.

Elungata assured residents that security has been beefed up in the region.

The RC, who addressed the media on Monday outside his office after holding a meeting with Lamu county elected leaders, condemned the recent attacks.

The meeting came barely a week after Interior Cabinet Secretary Fred Matiang’i held a meeting with the elected leaders in Nairobi last Friday to deliberate on the security situation in the county.

“I want to tell wananchi not to fear, these are just petty criminals that the government, through the security apparatus, is going to deal with properly,” Elungata said.

He said the national government has invested a lot in the county with the construction of the Lamu port already attracting investors both locally and internationally plus a number of road infrastructure projects.

Therefore, he said, the government is not going to allow small incidents of insecurity threaten the investors and derail the county’s economic growth.

“The government has invested a lot in the Port of Lamu and several roads within the county. We have agreed as leaders that we will not allow anyone with the bad intention of destroying Lamu to come in between,” he said.

He said they were fully behind the government’s security interventions, adding that they were all eager to see those behind the attacks on innocent citizens brought to book.

“We have enjoyed peace and security for a while now, the recent insecurity incidents should not be cause for any alarm. I believe things will be back to normal shortly,”  Twaha said, adding that government does not negotiate with criminals and terrorists.

“Kenya has a functioning government and we will not be shaken by the foolishness of the attackers, it won’t end well for them,” he said.

He also added that they had resolved to urgently form a leadership forum consisting of both elected leaders and opinion shapers within the community with the sole agenda of finding a solution to the security situation in the county.

Senator Loitiptip urged the residents to maintain religious tolerance and not agree to be divided along tribal lines.

“The enemy is within us and we have left it to the government to deal with that. We will not allow the peace, love and tranquility we have enjoyed over the years to be derailed by a few selfish individuals,” he said.

He called for calm especially within the Kibaoni area where tension is said to be high, urging residents to be vigilant and allow security apparatus to conduct their operations.

The senator further questioned the motive behind the insecurity activities witnessed in the county barely six months to the next general election.

He said the meeting had also resolved to conduct a series of meetings with residents ahead of a planned visit by the Interior CS.

“Those using social media platforms, especially Facebook, to spread fear and panic should stop and should be arrested immediately, they are the ones inciting communities against communities,” she said.

She further cautioned the residents against taking the law into their hands and going into the forests to pursue the criminals, saying that it will make it difficult for security officers to differentiate between them and the criminals.

“Let the security personnel handle the situation, Lamu is currently an operation area, roaming around on motorbikes looking for the criminals might land you in trouble because it might be difficult to differentiate you from them,” she added.

Muthama reiterated that Lamu residents have been living in harmony like brothers and sisters without tribal or religious conflicts.

He said it was sad to see insecurity incidents threatening the national government's major investments, the port and road networks.

“I appeal to all residents of Lamu and those who have invested in the county that we as leaders have put our political differences aside to foster unity so that the county can prosper and be a better place for everyone,” he said.

One suspect killed as operation intensifies in Lamu

The officers were ambushed between Liboi and Kulan area.
News
1 week ago
by ONYANGO OCHIENG
Coast
11 January 2022 - 22:00