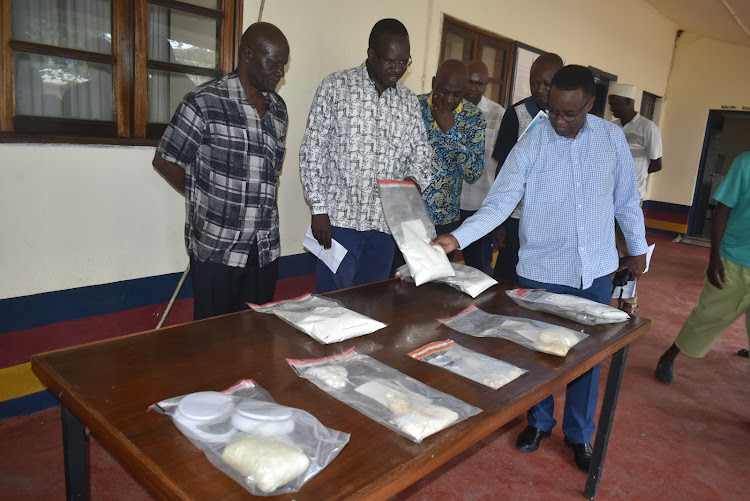 The body of missing suspected Mombasa drug baron Masuo Bakari Tajiri has been found at a mortuary in Thika, Kiambu county.

The body, which was badly decomposed, had marks of torture and burns.

Masuo’s wife Caro Nyambura said she was not sure whether the body was her husband's.

“I’m not sure if it is Tajiri or not. The photos show the beard is dyed while he never dyed his," she said, adding that the forehead looks like Tajiri's and that is why she cannot confirm.

“I will comment further when my doubts have been cleared. At the moment, I'm in hospital with a sick child," she said.

Tajiri went missing on December 5 alongside two others people who had accompanied him to Thika to purchase a new matatu.

Mohammed Hussein and Fahmi Bakari are still missing with the families hoping for their safe return.

Hussein's father Babadi Mohamed, who went to Thika when he received the information on the body, confirmed it was Tajiri.

"His body is mutilated, a clear indication that he was tortured and burnt to death," he said.

He however said his son and his friend were still missing.

Tajiri has been severally linked to drug trafficking in Kenya and beyond with authorities describing him as “Akasha in the making”.

He had been described as swift mover whose moves in the drug business were well and cleverly calculated.

Thrice, Tajiri had been arrested with heroin worth millions of shillings, but somehow managed to secure bail.

He was facing three drug-trafficking cases in Mombasa courts but was out on bond in all of them.

In December, a Shanzu court acquitted him in one of the cases where he alongside Fatuma Sicobo, were accused of trafficking 2.5kgs of heroin worth Sh22 million having been arrested in April 2019.

Tajiri, who was already missing during the judgment, escaped the hook as he was acquitted but his co-accused was sentenced to a lifetime in prison.

In 2017, he was arrested in a crackdown targeting Italians suspected of being involved in the narcotics trade and who were found with heroin worth Sh10 million, cash and ammunition.

Police records show that Tajiri’s troubles with the police did not start in 2017 but are dated back to 1994 where he was charged with robbery with violence before he was sentenced to face the hangman.

He was however lucky as he was among those who were released after a presidential pardon in 2014 having already served 20 years.

Tajiri is also linked to another suspected drug baron Swaleh Kandereni alias "candy rain" as they are reportedly married to two sisters.

Five suspects are missing while others were killed in unclear circumstances.
News
4 months ago