Between 2018 and 2021, some 140 cases were concluded despite intrusion of cartels

• The DPP said the Kemsa scandal file, in which millions are said to have been lost in dubious deals, had not covered everything they needed to have for a concrete case. 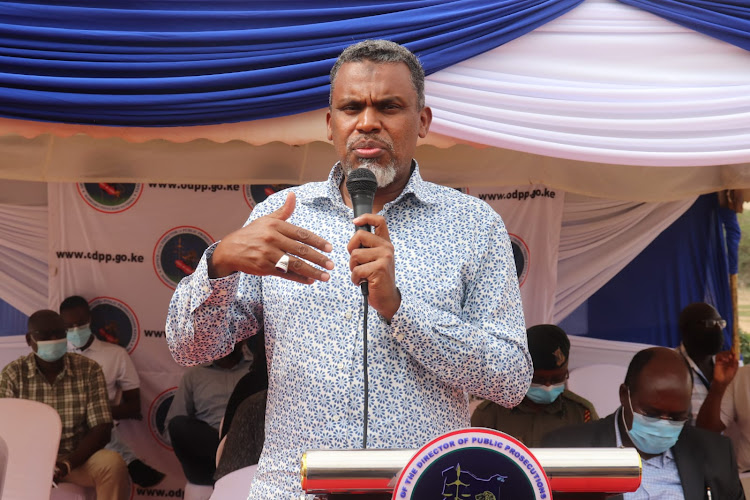 WAR ON GRAFT: DPP Noordin Haji at a past event.
Image: STEPHEN ASTARIKO

The conviction rate of corruption cases has improved over the last three years, Director of Public Prosecution Noordin Haji has said.

Haji said this year, they have had a 64 per cent conviction rate of graft cases.

He added that the proportion of cases concluded with convictions to acquittals has constantly improved from 2018 to date.

The DPP spoke at this year’s International Anti-Corruption Day celebrations at the Mama Ngina Waterfront in Mombasa.

This year’s event, whose theme is, 'Your right, your role: Say no to corruption,' was attended by Attorney General Kihara Kariuki, EACC vice chair Sophia Lepuchirit and EACC chief executive Twalib Mbarak.

“As the ODDP, we want to increase our success rate. Concerted efforts by our office and other actors, including the Directorate of Criminal Investigation and Ethics and Anti-Corruption Commission has resulted in this impressive achievement,” he said.

The DPP listed about 26 cases, including that of Sirisia MP John Waluke and his business associate Grace Wakhungu who were charged with three counts of fraudulent acquisition of public properties, altering a false document and forgery.

The two, who are out on cash bail, were convicted last year after they were found guilty of fraud and illegal acquisition of Sh297 million through shady deals at the National Cereals and Produce Board.

They were handed a combined fine of Sh2 billion and in default, Wakhungu was handed a 39-year sentence, while Waluke was jailed for 34 years.

After three months in prison, Waluke and Wakhungu were released on Sh10 million and Sh20 million bail respectively, as they await the appeal.

“The case of Waluke is one of the largest files we have handled, in terms of fines and the sentence delivered, '' Haji said.

However, despite the achievements in prosecuting high-level corruption cases, Haji admitted that there are cartels who are hell-bent to frustrate his office.

“We still face some challenges, but as ODPP we are prepared. We are only facing frustrations from the cartels, who want to derail their cases. They want to misrepresent facts and certain issues,” he said.

Despite reports that the ODDP, the DCI and EACC are not working in collaboration, Haji said the three agencies are guided by the law in their mandate.

The DPP said the DCI and EACC are in charge of investigations and their office is mandated with prosecuting the files brought to their office.

“Our roles are clearly stipulated in the constitution. The DPP has the mandate of ensuring that all files brought to us have all the evidence required, if we feel that something is amiss, we will return the file.

"The Constitution does not force us to agree with everything presented to us,” he said.

Haji said whenever a file is returned to either DCI or EACC, the DPP’s office writes a report on what they believe should be done.

“We give details on what is not ready. We are not only interested in prosecution, but prosecutions that will benefit Kenyans and we follow the constitution to the latter,” he said.

The DPP said the Kemsa scandal file, in which millions are said to have been lost in dubious deals, had not covered everything they needed to have for a concrete case.

“In this case, we are saying that it will be prosecuted differently because money lost has to be recovered and those involved brought to book.

"We have also asked other countries to assist, because during that time some goods and services were acquired from abroad,” he said.