Kaya elders on the spot for secret meeting with DP Ruto 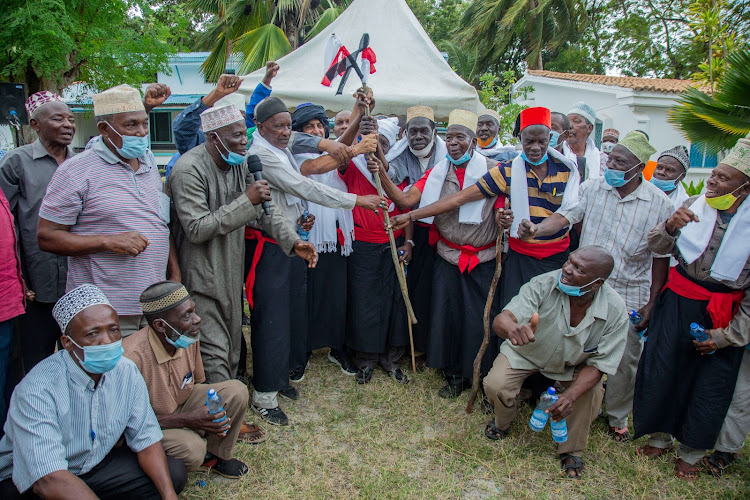 The Kaya elders, two from each of the nine Kayas at the Coast, checked in at the high-end English Point Marina on Saturday evening before they met DP Ruto, who also spent a night at the hotel, on Sunday morning.

The meeting, which lasted about an hour and a half, was also attended by former Mombasa Senator Hassan Omar, raising speculation that the elders endorsed him as their preferred governor candidate to succeed Hassan Joho in the 2022 General Election.

However, this did not go down well with a cross section of youth and political leaders from the Mijikenda community.

Nguma Charo, the Mijikenda Youth Coast chair, said they were not informed of the meeting, which also caught close DP ally and former Kisauni MP Ananiah Mwaboza by surprise.

“This is not right. The elders are representatives of the community and whatever they do must be agreed upon by the community.”

Nguma said the elders breached an agreement in place between them and the Mijikenda youth that they will be consulting each other before making any moves on behalf of the community.

The agreement was put in place following increased cases of killings of elderly Mijikenda community members on suspicion of being witches, events that worried President Uhuru Kenyatta, who condemned them.

“We never endorsed anyone. We only went to meet and greet the Deputy President,” Mnyenze said.

The Kaya Kinondo elder told the Star on phone they presented issues affecting the community that they would like the government to address.

“Kayas have no title deeds and we fear land grabbers may want to defile the sacred areas because of their greed,” he said.

He said Kaya elders are not recognised by the government and they would like this to change.

He also said they presented a petition to Ruto to permanently address the wanton killing of the elderly on suspicion of practising witchcraft.

“If we were to endorse anybody, we would not do it in a hotel or anywhere else other than in the Kayas,” Mnyenze said.

He noted that Kayas are respectable areas that cannot receive just anybody without due diligence.

Mwaboza, who addressed the elders in the presence of Ruto before leaving the meeting, said the elders never endorsed Omar.

“Their mission was to see Ruto and not anyone else,” the former MP said.

“The Mijikenda have not and will not endorse Hassan Omar for Mombasa governor. We are tired of being used,” Cidi said.

She said the secrecy with which the meeting was called showed the elders and whoever organised the meeting knew they were wrong.

“Arm twisting our Kaya elders with Sh10,000 each will need to stop. The region has a lot of problems and challenges and that of who will be the next governor of Mombasa is not one of those problems,” she said.

USPK chair Matano Chengo said the Kaya elders who met Ruto have no right to endorse anybody on behalf of the community.

“Which sitting decided that the Mijikenda should endorse Omar? The elders like being used. They never consulted anybody,” Chengo said.

“Has it become a business? Those are people who were hungry and went to Ruto to eat.”

Mohammed Heri, a close confidant of Mwaboza, said the former MP was equally surprised to see the elders meeting Ruto.

Heri, who was with Mwaboza during the meeting, said the ex-MP had to address the elders in their Mijikenda dialect upon seeing them.

“We did not know what was going on. Neither I nor Mwaboza knew who organised the meeting and who facilitated it,” Heri said.

He said as chairman of the community in Mombasa, he should have been informed of the meeting.

Charo, however, said there is nothing wrong with the meeting but endorsing a candidate or even speaking on behalf of the community on such serious matters without consultation is what angered people.

He said the community suffers alone in hard times with no one to help them, but when it comes to political matters where people need help, they run to them.

“Where were the leaders when the community was being evicted from Lamkani by a private developer who grabbed the land,” Charo said.

“Where were they when we, together with some elders, were arrested because of fighting for that land?”

Other Kaya elders from the region had planned a meeting at the Malindi Cultural Centre on Monday to discuss the matter.

“The meeting will come up with the way forward so as to avoid such occurrences in future,” Charo said.