Ruto: Raila has given in to hustler narrative with his Sh6,000 promise

• He, however, said instead of promising Kenyans handouts, Raila should be talking about job creation and empowerment programmes. He said handouts are demeaning.

• Ruto will visit Taita Taveta, Kwale, Kilifi, Lamu and Mombasa. This is Ruto's third tour of the coastal region in recent months. 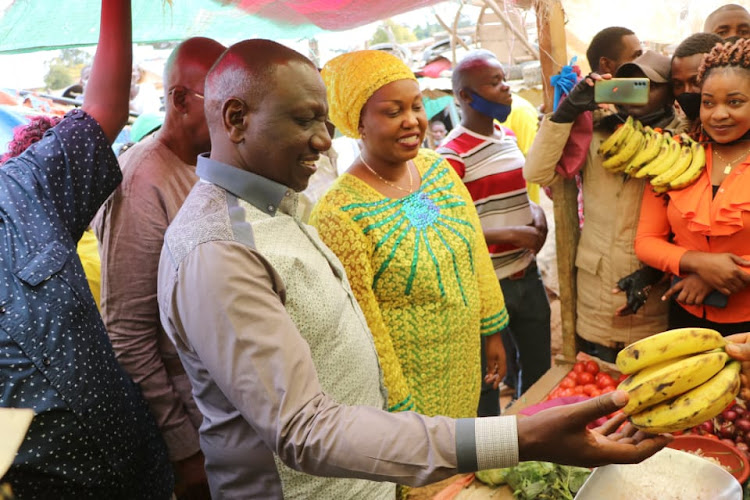 Deputy President William Ruto on Thursday said ODM leader Raila Odinga has given in to the hustler narrative by promising to give poor Kenyans Sh6,000 every month.

He, however, said promising Kenyans handouts is demeaning.

“We have been campaigning on the promise of giving Kenyans jobs and providing empowerment and employment programmes. My opponents want to demean the youth by promising to give them Sh6,000 handouts. However, I officially welcome them to the hustler nation,” Ruto said in Wundanyi, Taita Taveta county.

On Wednesday, Raila outlined a social welfare programme, saying he will give Sh6,000 to at least two million households that are languishing in poverty.

He said the programme will integrate with the current social protection programme, such as Inua Jamii, which he said consumes Sh37 billion annually.

Raila has also pledged to cancel Helb loans for graduates.

The DP spoke during his first day of a six-day tour of the Coast region.

He will visit Taita Taveta, Kwale, Kilifi, Lamu and Mombasa counties. This is Ruto's third tour of the coastal region in recent months.

He will try to popularise the United Democratic Alliance and bottom-up economic model.

Ruto said in the 2022 General Election, voters will weigh between the bottom-up and trickle-down economic models. He said the best model shall be voted in by Kenyans.

He said construction work on the stalled Bura-Mwanda-Mtomwadogodi road had already started. The key road, the DP said, will be completed in the next one year and will open up the agricultural rich Wundanyi subcounty.

The 54km road had stalled due to misunderstandings occasioned by the Building Bridges Initiative campaigns, he said.

"BBI reggae interfered with many projects in this region including the Bura road and the Mzima II water project. We shall implement the stalled projects," Ruto said.

Mruttu said the bottom-up model will help support SMEs and create employment for the youth.

"We are supporting UDA because the proposed economic model is the best for this country. It is the right time to change our approach towards economic growth," he said.