All the suspects were boda boda riders who operated in Mtepeni area, a kilometre away from the murder scene.

• Eight boda boda operators, including the suspected mastermind behind the murder, were arraigned before Shanzu law court 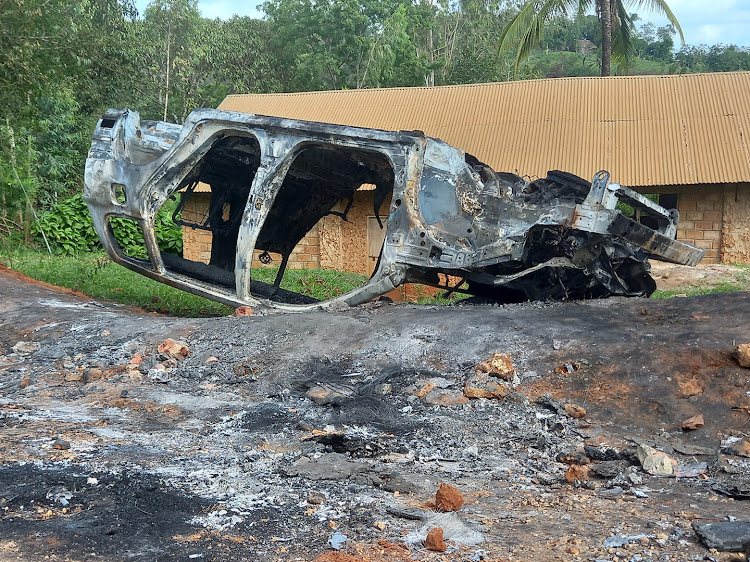 WRECKAGE AND MURDER: Dairy investor Sidik Symrar, his well-known surveyor and driver were beaten to eath and burned in their vehicle as they went to survey lan in Kilifi.
Image: ELIAS YAA:

Homicide police in Kilifi continue to unravel shocking details that led to the murder of three people, including businessman Sidik Sumra.

Sumra, his driver Rahil Kasmani and lands agent James Mzungu were murdered on July 7 at the Junju area in Kilifi county.

The businessman had visited the area to view a land he intended to buy to expand his dairy business.

On Monday, eight boda boda operators, including the suspected mastermind behind the murder, were arraigned before Shanzu law court.

The prosecution asked the court to grant the police 21 days to enable them finalise their investigations.

The court was told that all the suspects were boda boda riders who operated in Mtepeni area, a kilometre away from the murder scene.

Investigations officer Dennis Isemek said data analysis had revealed the suspects were at the crime scene when the killings happened.

Isemek said on July 7, Sumra and the other two went to view the parcel, which is occupied by squatters.

He said Mganga was the treasurer of Junju 72 Land Committee, which was mandated with spearheading the acquisition of the same land Sumra intended to acquire.

Police said on the day the trio was killed, Mganga was at the boda boda stand in Mtepeni when Sumra arrived.

Mganga and his colleagues allegedly interrogated the deceased before killing them.

The suspect is alleged to have further paid his co-suspects Sh300 each so as to drag the bodies from where they had been killed and damp them next to their vehicle to conceal the crime scene.

Isemek said the suspects then burned the car after vandalising.

“The respondents then deserted their homes and even changed their mobile numbers to avoid being tracked by the police,” Isemek said.

The investigator said the deceased were murdered by the suspects who claimed they had gone to take their land.

In 2020, the suspected mastermind is said to have met with the land agent, Mzungu, who was with a land surveyor and former MCA Onesmus Gambo, when he intended to identify beacons of a portion of land that would have resulted in the subdivision of the contested land.

But Mganga is said to have denied the deceased and the surveyor access to the land.

The court was told the police were in the process of recording statements from witnesses in Kilifi and Kwale and it was likely for the suspects to interfere with the potential witnesses.