• Mombasa county has about 220 doctors and 800 nurses, strike could paralyse public health services.

• From Wednesday, the doctors say, they will join nurses in demanding two months' back salary. Nurses walked out from November to February this year. 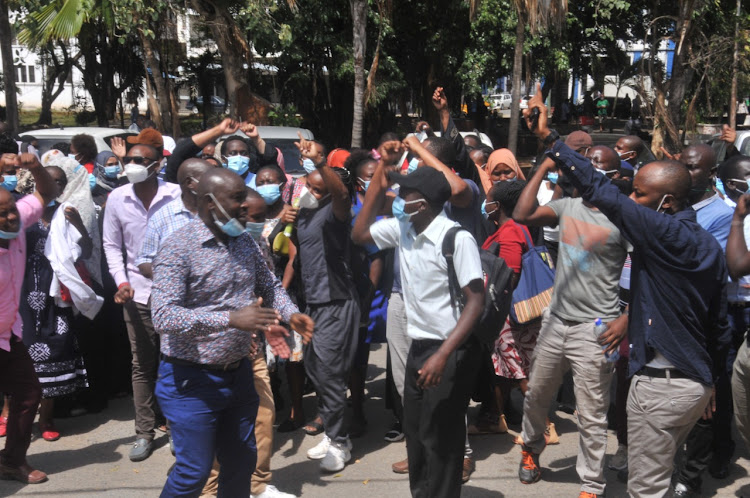 A week after nurses and other health workers went on strike, doctors are planning to join them from Wednesday.

In a memo seen by the Star, Kenya Medical Practitioners and Dentists Union Coast branch secretary Nassir Shaban asked all  doctors in Mombasa to meet on Wednesday to deliberate on their issues.

Assembly Deputy Speaker Fadhili Makarani said the salary issue is being resolved and the National Treasury has already sent funds to the county accounts.

Last Tuesday, to avert further protest from employees, the Mombasa assembly passed a motion to allow the county treasury to borrow Sh427 million to pay salaries.

The MCAs also approved an additional Sh30 million to be borrowed for the county assembly staff.

However, on Monday Kenyan National Union of Nurses members in the region said they will only return to work after their salaries are reflected in their accounts.

KPMDU joined the push, saying from Wednesday no doctor will be available in any public facility until the issues are addressed satisfactorily.

Controller of Budget Margaret Nyakang’o saidMombasa is among the 10 counties blocked from accessing funds after failing to submit budgets for approval.

The Public Finance Management Act, 2012 stipulates that county assemblies shall approve budgets (appropriation bills) by June 30 of every year.

Mwachi said the issue of salaries could have been resolved if the assembly was through with the budget-making process.

“The delays in disbursement of funds from the National Treasury is a self-inflicted problem by the county. They have over and over again been making the same mistakes that the Controller of Budget has been pointing out,” he said.

Mwachi said it will not be possible to take a Sh427 million loan.

“The county has been defaulting in paying its loans, making it impossible for financial institutions to give them new loans," he said.

"Additionally, due to perennial salary delays, a number of county staff have also been listed under the Credit Reference Bureau, which also makes it difficult for them to access salary loans,” he said.

KNUN Mombasa branch secretary Peter Maroko told the Star they are yet to receive any update from the county government.

They have been asked to appear before the county assembly on Wednesday to table their issues.

“So far nothing has been done to resolve our grievances. We expect to appear before the finance, health and labour committees of the assembly on Wednesday.

"If by Wednesday they will not have resolved the problem, the health sector will completely be paralysed as doctors join in [the strike],” he said.

Mombasa county has about 220 doctors and 800 nurses.

Deputy Speaker Makarani said they shelved the decision to borrow after receiving an assurance from the government that money will be released.

“There are errors which the National Treasury had raised. As a county we were able to address the issues and money has since been released to the county.

"Workers are expecting to get their salaries from today (Monday) throughout the week,” Makarani said.

He said they will meet the executive and the health workers on Wednesday to find a long-term solution.

The county reacted by sacking 86 doctors, who were later reinstated after a return-to-work formula was crafted.