•KMA director-general Robert Njue on Tuesday called for a policy shift at both the national and county government level to kick-start the positive change with regards to plastic bottles.

•He said 80 per cent of the plastic bottles find their way to the Indian Ocean and they should come up with innovative ways of using them. 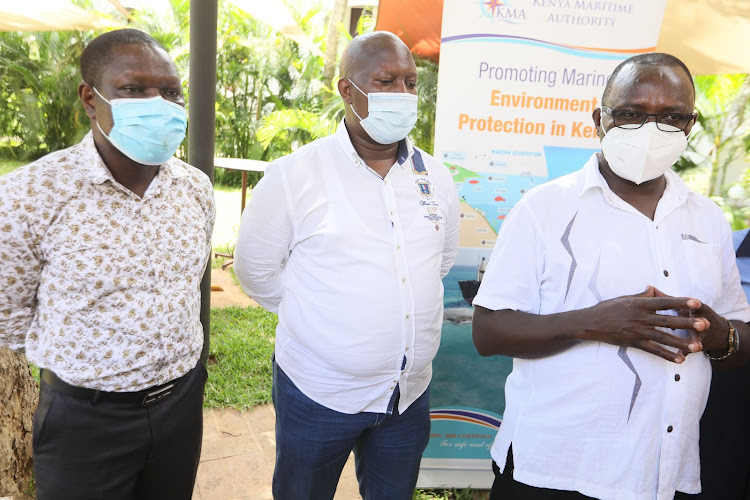 Kenya Maritime Authority wants to come up with an innovation hub in Mombasa to help the youth use dumped bottles piling up the Indian Ocean.

KMA has asked partners to come on board and help them achieve the objective.

KMA director-general Robert Njue on Tuesday said there needs a policy shift at both the national and county government level to kick-start the positive change with regards to plastic bottles.

He said 80 per cent of the plastic bottles find their way to the Indian ocean and they should come up with innovative ways of using them.

Njue spoke during the partnership meeting on plastic waste management in Mombasa.

In Ivory Coast, Eric Becker, a French restaurateur, collected over 800,000 plastic bottles littering the beaches and built a 1,000-square-metre floating island, which is now an attraction site for many tourists.

The island houses a hotel restaurant and is placed on a surface with plastic bottles.

Njue believes Kenyan youth are innovative enough and can come up with something useful built using plastic bottles given the right push.

“Already, we have signed a deal with Helb to help increase the skills and knowledge of the young people in the maritime sector,” Njue said.

Governor Charity Ngilu said she is ready to partner with KMA in such a venture.

In a statement read on her behalf by Kitui environment executive Patrick Musau, Ngilu said Kitui is a critical catchment for the Indian Ocean.

The two main rivers that drain into the Indian Ocean, Tana and Athi, traverse through Kitui and carry a lot of waste including plastics into the ocean, threatening the marine ecosystem.

Ngilu said there is high potential in employment creation in sustainable waste management both in Mombasa and Kitui.

“We are in the process of establishing a sanitary landfill at Kanyoo in Kitui Rural sub-county which will be supported by various transfer stations and collection centres in our main urban areas such as Kabati, Kwa Vonza, Mwingi, Mutomo, among others,” Ngilu said.

On his part, Musau said in the transfer stations, wastes segregation and sorting will be critical and already youth and women groups have been formed to collect all plastic bottles which are sold for re-use.

Mombasa environment executive Godffrey Nato said the county, which produces 900 tonnes of household waste a day, is working towards sorting the plastic waste from the garbage before doing away with the organic waste.

“We have established a material recovery facility in the department’s yard to facilitate retrieval of the plastic bottles which can be used for other purposes including recycling,” Nato said.

Already, the county has registered over 1,500 youth who collect waste and earn about Sh1,000 a day.

Five recyclers have also been registered.

One is about to turn waste into soap and synthetic oil and another wants to turn plastic waste into energy.