The bridge is 28 per cent complete, four months to the deadline

•  The parliamentary committee to summon the contractor over the slow pace of the construction of the bridge.

• On paper, it is a modern facility, but the situation on the ground is pathetic - only Sh5.5 million has been spent on it. 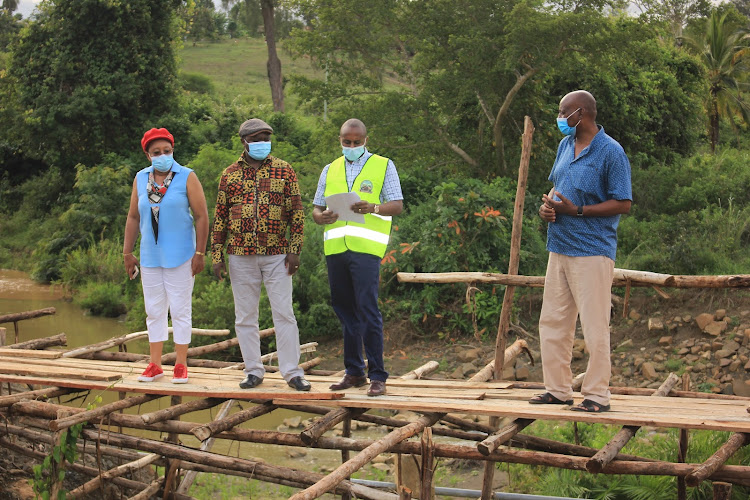 A parliamentary committee is dissatisfied with the progress of the Chengoni Bridge in Kilifi South.

Members of the Special Funds Accounts committee said during a tour of the site on Monday that they were apprehensive that the contractor of the Sh55 million bridge will not complete the job in the stipulated time frame.

The bridge is funded by the government through the Equalisation Fund. On paper, it is a modern facility, but the situation on the ground is pathetic. Only Sh5.5 million has been spent on it. The project is indicated to be 28.7 per cent done.

"There is no work going on at the site at the moment and the contractor is not even around despite sending him a communication that we will be visiting today.”

The chairman said they will summon the contractor to explain the delay.

“We will summon him to appear before the committee in Nairobi. We want him to complete the construction so that the public can get value for money,” the South Imenti MP stated.

He regretted that most local contractors have no capacity to undertake major projects.

“The biggest problem we have with contractors is that they take many contracts at ago, yet they lack the capacity to see them through. They should take a contract that they are sure they will complete in record time so they can be paid in time and move to other projects.”

The site engineer said the contractor was attending to other duties and he had promised that the bridge will be completed in six months.

“We have applied for extension of the completion period with two months so by June the bridge will be complete,” he said.

Nyandarua Woman Representative Faith Wairimu was sceptical that the contractor will complete the job in time, noting that there was no equipment on site.

“Grass has grown where you store your wheelbarrows, a clear demonstration that they are not being used. We have not seen even a single person working here. How can we tell this is an active site?” Wairimu asked.

Chengoni bridge is meant to ensure the safety of residents crossing the river to Kaloleni and Mwaarakaya. The river has claimed many lives and it is impassable in the rainy seasons