Kitchen gardens a sure way to boost food security amid pandemic

Pastor Juma has developed a successful kitchen garden outside his house in Voi town centre.

When the coronavirus crisis hit the country in March, prompting the closure of businesses, farmers were adversely affected. Food security went down as city dwellers struggled to access farm produce from rural areas. 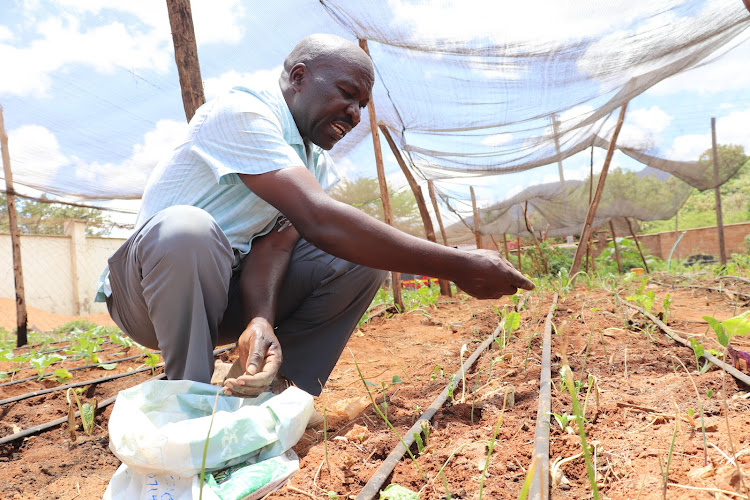 When the coronavirus crisis hit the country in March, prompting the closure of businesses, farmers were adversely affected.

Aaron Juma, a resident of Voi town in Taita Taveta county, decided to employ technology to ensure his family of seven had enough food. He has developed a kitchen garden outside his house in Voi town centre.

He says the idea has proved that urban dwellers have the potential to contribute towards realisation of a food secure country.

“This garden not only serves my family but also other people in the town. I sell close to 11 kilograms of vegetables every day to my neighbours,” the farming enthusiast, who is also a preacher, told the Star.

In his seven-month old garden, he grows tomatoes, lettuce, onions and indigenous vegetables, among other crops.

He said the idea came after he was forced to retire to his home following the closure of places of worship due to the virus.

“Initially, the idea was to start a small garden that could sustain my family during the pandemic period. It has now turned to be a gem,” he added.

He underscores the fact that the widespread effects of Covid-19 have gone a long way in affecting food security in the country.

And as the world marked the World Food Day, Aaron called upon all urban dwellers to swing into action and bridge the gap towards realisation of zero hunger in line with the Sustainable Development Goal 2. He says there is unexploited potential for people living in urban areas to produce enough food on kitchen gardens.

This year’s World Food Day theme is 'Grow, nourish, sustain. Together. Our actions are our future.'

Current estimates by the World Food Programme show that nearly 690 million people are hungry, or 8.9 per cent of the world population.

The data further shows that the world is not on track to achieve zero hunger by 2030. If recent trends continue, the number of people affected by hunger would surpass 840 million by 2030.

“The coronavirus pandemic could now double that number, putting an additional 130 million people at risk of suffering acute hunger by the end of 2020,” the report reads.

The global population is expected to reach almost 10 billion by 2050.

In Kenya, the government is targeting to have one million households set up kitchen gardens in efforts to boost food security and nutrition.

Taita Taveta county executive for Agriculture, Livestock and Fisheries Davis Mwangoma says kitchen gardens are one of the easiest and fastest ways to ensure regular supplies of fresh vegetables, fruits, spices, eggs and meat for all households.

He says more farmers have been sensitised on the new technology in a bid to beat the target.

Abedih Mbatha, the Food and Agriculture Organization programme specialist in charge of Taita Taveta county, says food and agriculture are an essential part of the Covid-19 response.

“This year, we are making a call on countries to build back better by making food systems more resilient and robust so they can withstand increasing volatility and climate shocks, deliver healthy and sustainable diets for all and decent livelihoods for food system workers,” Mbatha said.

The day, he says will also celebrate food heroes who produce, plant, harvest, fish or transport food no matter the circumstances, continue to provide food to their communities and beyond.

He says a steady increase in hunger since 2014 together with rising obesity clearly indicates the need to accelerate and scale up actions to strengthen food systems and protect people's livelihoods.

About 14 per cent of food produced for human consumption is lost each year between the stages where it is grown or raised up to when it reaches the wholesale market. More food is wasted at the retail food and consumer stages.