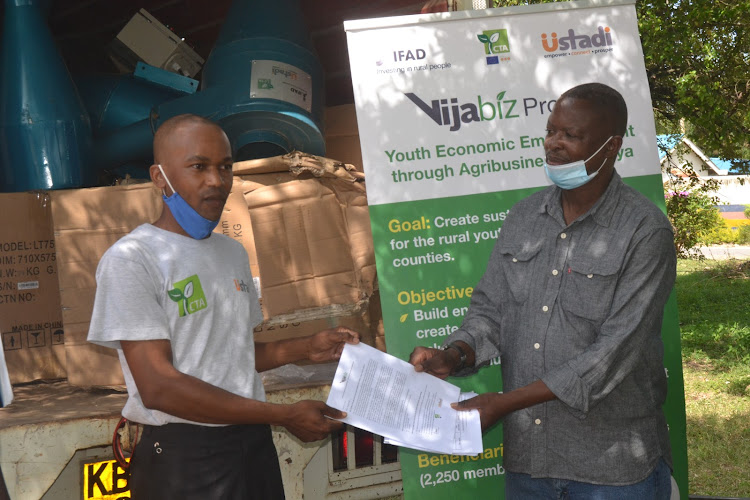 More than 160 youth groups from Kilifi and Nakuru counties have benefitted from a Sh200 million fund to engage in agribusiness projects.

Vijana na Business -Vijabiz - which started two years ago was funded largely by the International Fund for Agricultural Development together with CTA and implemented by Ustadi Foundation.

Speaking in Kilifi during distribution of equipment worth Sh11 million to four groups, he said the project covered cereals, fisheries and dairy farming.

The groups undergo advanced training in those areas. Mazuri said they had 73 grants to support the groups through a competitive process.

After the applications, they settled on 71 grants ranging from Sh100,000 to Sh1 million, depending on the state of businesses that the groups had.

"We hope these youths are going to take these projects to an extra level. Most groups are doing value addition. We have seen interesting initiatives including making yoghurt using improvised equipment," he said.

Initially, he said they expected Nakuru and Kilifi to share the grants equally but when the youths applied they received over 500 applications mostly from Nakuru.

"Because it was competitive we ended up having 50 groups from Kilifi and the remaining 115 from Nakuru county. You can see that for this particular project about two-thirds of the operations are in Nakuru," he said.

The project has several components, among them building entrepreneurial skills, which entailed using mentors.

"All the groups had websites, Facebook pages and Twitter pages, so communication was made easier. Every time we wanted to pass a message across, we just sent word through WhatsApp and all the groups receive the messages, which has reduced the costs," he said.

Kilifi county director of livestock Gideon Wambua said they supported farmers with more than 700 cattle and with the Ustadi project, they will help in marketing the products from the cattle.

Silvia Maganje from Mwarakaya said their group composed of 15 young mothers aged between 12 and 19 years wanted to transform their lives after getting children at a young age.