• He has won praise for his style of leadership in a time of crisis, which is arguably better than that of his compatriots in the Council of Governors. 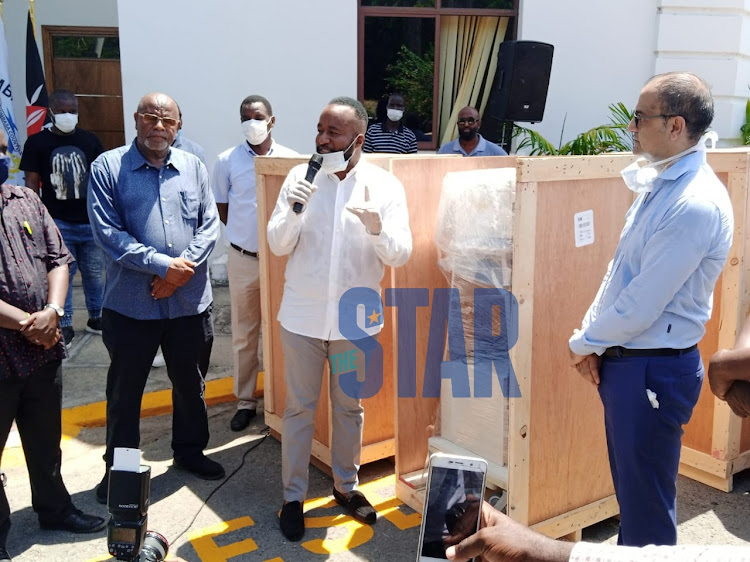 Mombasa Governor Hassan Joho is an avid advocate of total lockdown in the fight against Covid-19.

The governor has taken the lead in the fight in a way that has caught many by surprise. He has won praise for his style of leadership in a time of crisis, which is arguably better than that of his compatriots in the Council of Governors.

The county has even threatened to prosecute residents who fail to comply with directives.

Joho, who has set aside a Sh200 million war chest against the coronavirus from the county’s kitty, has been pulling different players together.

He has even acquired the most unlikely unofficial assistant, hitherto political rival Suleiman Shahbal, who has taken the lead role among the business community.

Shahbal’s idea of a disinfecting booth at the Likoni ferry crossing, where ferry users can be disinfected en masse, was quickly taken up by his new-found partner in crisis.

Within a week, the first of many sanitising spraying booths was on Monday launched on a pilot basis.

The ferry crossing has been one of the hardest areas to ensure social distancing is practised.

The booth was jointly donated by the Suleiman Shahbal Foundation and Hassan Joho Foundation.

The ferry also has thermal cameras to detect those with high temperatures and isolate them.

When the curfew began, GSU officers were recorded roughing up residents at the crossing channel for failing to queue.

The governor, in a passionate appeal, came to their defence saying most were only trying to survive and that security forces should be human while undertaking their work.

Joho’s partnership with the private sector has led Export Processing Zones to manufacture over one million masks which will be distributed to residents for free starting Friday.

As part of the county preparedness against Covid-19, Collaboration of Women in Development is training community health volunteers on the virus.

CWID director Betty Sharon said, “The governor called on us all to play our part. We believe community health workers are closer to communities and get the first-hand information.”

The group will train 15 volunteers per subcounty daily in line with the target from the government on gatherings.

County inspectorate teams have been disinfecting the town on specified nights to rid it of the viral infection.

With Joho chairing the Covid-19 committee in the fight against the virus, a raft of directives has been issued including the moving of Kongowea market to other satellite markets in the town.

This, according to communications director Mudadhir Abdulkar will  ensure that residents do not meet in one place and in turn transfer the disease, making it difficult to contain.

“I’ve always said that that may be the solution,” the governor said when asked whether he is advocating for total lockdown.

Through networks, Joho and Shahbal have acquired more ventilators for Covid-19 patients at the Coast General Hospital.

Joho said the private sector has contributed about Sh100 million which will go towards buying food and medicine for about 227,404 vulnerable households in the county.

“We will not allow our people to go hungry in case of a lockdown."

He said they have mapped out where the vulnerable households are using data from different agencies and also from their own collected data.

County water bowsers will be taking water to slum areas and other places with scarcity, Joho said.

Mass testing of residents is expected to start on Wednesday (yesterday), with the county having spent about Sh124 million on medical equipment.

If the county gets the necessary equipment, it will conduct at least 700 tests a day.

Joho also revealed that in collaboration with other health providers, they want to build a Covid-19 hospital outside the regular facilities.

Already, he and county speaker Aharub Khatri have taken 80 per cent pay cuts. A large percentage of county workers is also working from home.

This week, he donated Sh100,000 to a woman who and her children were pictured crossing the Likoni channel wearing masks fashioned from plastic bottles.

It is now a requirement that all ferry users wear masks.