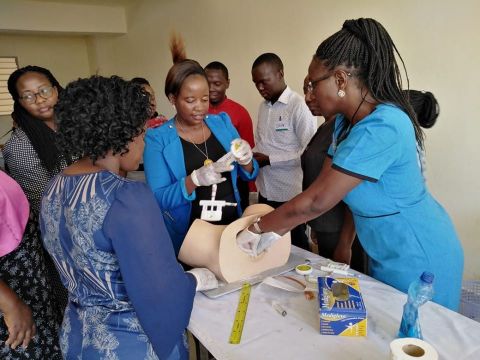 Taita Taveta county has called on the National Treasury to urgently release funds owed to them for the 2019-20 financial year.

Deputy Governor Majala Mlagui on Monday said failure to release the funds might derail the county's preparedness to combat Covid-19.

Addressing journalists at Moi County Referral Hospital in Voi, Majala asked Treasury CS Ukur Yatani and the Controller of Budget to swiftly release the funds so the county can equip the isolation centres.

"If the funds are timely released, we shall be able to strengthen our systems before the virus knocks. As at now we are struggling with limited resources," Majala said.

However, she said the county was working closely with the Kenya Red Cross, port health officers at the Taveta border, private hospitals and the national government in readiness for any emerging case.

The county, she revealed, has set up two isolation units with a 10-bed capacity in Voi and Taveta subcounties.

Flanked by members of the county emergency response team, the deputy governor pointed out that the devolved unit was keen to ensure compliance with all government directives to control spread of the virus.

"We are in contact with SGR management to ensure screening is thoroughly done at the Voi and Miasenyi stations. There is also a random screening at the bus stages," she added.

"Attendance of burials and weddings shall be limited to close family members with no extended reception gatherings," he said.

Further, Mwakina advised parents to ensure children remain at home following the President's directive that all schools are closed.

He asked members of the public to make use to the reduced M-Pesa transaction charges and use cashless mode of payment.

Kiprotich warned that those involved in spreading fake information and those found breaking the law shall be brought to book.

"Don't be deceived that the police cannot arrest you because courts are closed. We shall arrest you and deal with you accordingly," he warned.