• Rights defenders deplore what they call rising cases of extra-judicial killings and enforced disappearances in Kwale, Lamu and Mombasa.

• Activist says a rapporteur specialising in investigations of mysterious kidnappings and torture will be required to visit to establish facts. 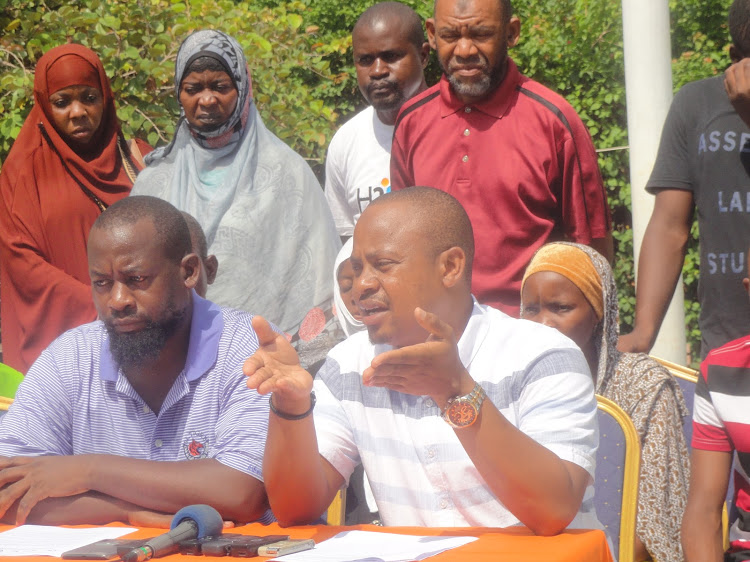 Activists have threatened to sue the Kenyan government in international courts over increased cases of human rights violations at the Coast.

They said the state has a case to answer over extra-judicial killings and forced human disappearances in the coastal areas of Kwale, Lamu and Mombasa.

It was not clear which court or courts the activists referred to.

In Kwale, the hotspots are Ukunda and Mlungunipa in Msambweni subcounty.

In four years, more than 50 people were killed and more than 25 others disappeared in the county, activists claim.

Led by Muslims for Human Rights rapid response officer Francis Auma, the activists said they will file first a report with the African Commission on Human and Peoples Rights to help address the problem "because Kenyan courts have failed".

“The habeas corpus method has proved to be unfruitful. It is time we go for the international communities to deal with the government,” Auma said.

He said a rapporteur specialising in investigations of mysterious kidnappings and torture will be required to visit the country to establish facts.

Such visitors would require a visa from Kenya. Also, UN special rapporteurs cannot enter without an invitation from the host country.

Auma spoke on Saturday during a phone interview during efforts to finding an Imam, Mahmud Mohamed Ganzala, who was last week attacked and abducted by unknown men after leading evening prayers at Kombani in Matuga subcounty.

“We have a number of scenarios where people were captured, tortured, detained and released after putting pressure [on them] and they have told us who took them and what transpired."

He said assassinations and abductions have become common, some of which happen at the doors of the rescue centres.

“We rest our case with security agencies unless the government convinces us otherwise because these people use expensive vehicles and armaments provided by the state when they come for the suspects,” the activist said.

He said malicious individuals can impersonate police officers and it would be unfair to accuse them on the basis of hearsay and without in-depth investigations.

Nthenge deplored that some of those cases do not reach their offices and said it is difficult to investigate accounts that lack formal reports.

"The work of police officers is to protect and safeguard the rights of the citizen, and not to deprive them," he said.

The police boss urged activists and affected family members to work together with the police to gather useful information, rather than turning on each other.

He urged people to remain calm and abide by the law as investigations are ongoing.

But Auma said they don’t oppose government efforts to fighting extremism and radicalisation "but they should be done in the most humane way".

The civil society organisations had last year reported that killings and disappearances have left about 300 children orphans and more than 70 women widowed in Msambweni constituency in Kwale alone.

Auma said the government must include the youth in development agendas, give them basic required documents and listen to the discriminated against and marginalised groups since they easily fall prey to al Shabaab recruiters.

In December, Human Rights Agenda executive director Yusuf Lule pledged to organise weekly protests if the government does not respond to cases of murders and kidnappings.