Abandoned seamen yet to return home from Mozambique

10 crew members are still stranded in the port of Pemba 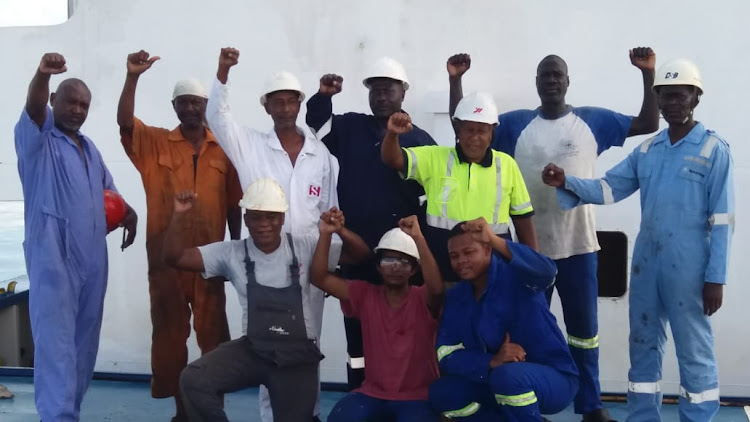 ABANDONED: Ten Kenyan seafarers on board the MV Nina at the port of Pemba, Mozambique
Image: MBARUKU MOHAMED

When 10 Kenyan seafarers flew out to Mozambique in August reportedly to board a ship on a long voyage to Iran, they had no clue what lay ahead.

Four months down the line, the 10 crew members are still in the port of Pemba, Mozambique, apparently abandoned by their employer.

The Seafarers Assistance Programme (SAP) says the crew on board a Comoros cargo ship MV Nina is now running out of fuel, fresh water and other supplies.

“They left Kenya on the understanding that once they reached Mozambique they would then sign their employment agreements after negotiating terms with the employer,” Andrew Mwangura of  SAP said.

He said the ship is owned and managed by a Maputo-based Mozambican businessman and an Iranian national.  However the vessel does not have insurance cover in line with the Maritime Labour Convention 2006.

An insurance cover would have helped in repatriating the seamen in case of abandonment.

“When they arrived in Mozambique, they boarded the ship and and were all set to sail. When they asked for the contracts they were told to wait. Days passed and nothing happened and every time they asked they were given the same response,” Mwangura said.

It is alleged that the Mozambican businessman who is a joint owner of the vessel fell sick and is hospitalized in South Africa.

However Mwangura theorizes that probably the vessel lost its business after its clients withdrew from an earlier commitment upon learning of the ship’s Iranian connection.

“Iran has been the subject of trade sanctions on the international scene and it is probable that the ship’s customers pulled out at the last minute,” he said.

Cases of abandonment of seafarers have been common, and according to Mwangura they have particularly been on the rise in the last five years.

In February, the Kenya Maritime Authority aided the repatriation of seven Kenyan seafarers from South Africa. They worked on board the Comarco Falcon vessel and they had been stranded in South Africa following a dispute with their employer.

“KMA mediated between the ship owner and the seafarers in line with their employment agreements and in accordance with the Merchant Shipping Act and the Maritime Labour Convention, 2006,” the maritime regulator said.

Mwangura said by the end of last month 14 new cases of seafarer abandonment had been recorded internationally.

Last year, a total of 791 merchant mariners aboard 44 vessels were abandoned. Fifteen out of 44 cases were resolved by end of that year.

According to the International Labor Organisation, between 12 to 19 crew abandonment incidents were reported annually and 1,013 seafarers were involved in total over the last five years.

Reasons for abandonment of seafarers in foreign ports include ship arrest by its creditors, detention by port authorities for flouting safety standards and financial challenges experienced by ship owners.

“The abandonment of ship and crew by a ship owner, either following ship arrest by or detention, has become commonplace today,” Mwangura said.

In many cases, the crew usually has not been paid for several months and by staying on board the crew exercises the only means of pressure available to them to avoid being totally forgotten.