•Gangs have developed some collaborative mechanisms where each has become his brother's keeper. Beefs have declined.

•Many gang members train three times a day, morning, noon and evening, on remote beaches. Parents told to be alert to youth who don't play sports but who train vigorously. 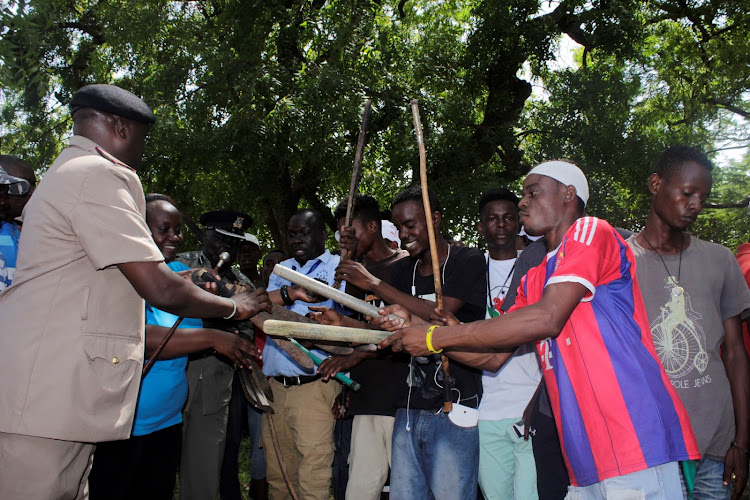 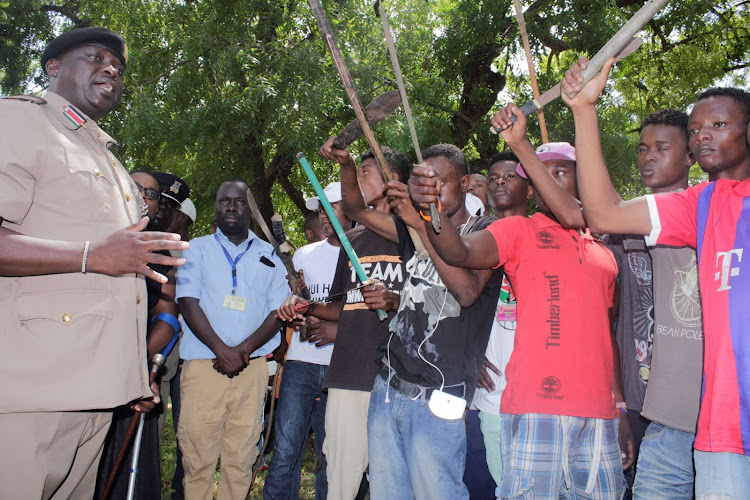 Now, the gangs offer shelter and safe houses for their ex-rivals from different gangs based in different areas of the county whenever they commit crimes.

Kisauni gangs that used to be sworn enemies have decided to collaborate and become their brothers' keepers.

Their beefs, which had led to battles for control of territory, have declined or been put aside for now as they make common cause and confront their common enemy: the cops.

Now, the gangs offer shelter and safe houses for their ex-rivals from different gangs based in different areas of the county whenever they commit crimes.

For example, gangs operating in Kisauni and Nyali subcounties often escape to Miritini, Mikindani and Likoni after their operations.

In the past, they used to hide among residents in the same areas where they carried out attacks. The residents were their human shields.

"They usually cross the sea from Junda in Kisauni subcounty to Mikindani or Miritini," a woman working with security personnel told a forum on Tuesday at Severin Sea Lodge in Mombasa.

The forum heard that the gang members use skiffs, canoes and small boats mostly used by fishermen.

It is not clear whether they own these vessels, hijack them from fishermen or collaborate with the fishermen for transportation.

The forum, organised by the National Cohesion and Integration Commission, aims to educate selected women, youth and elders from different sub-counties on national values, peace and cohesion.

The youthful gang members also train three times a day, morning, noon and evening at various beaches. Police told parents to be on the lookout and monitor youths who do not engage in sports but train vigorously.

Meantime, the Directorate of Criminal Investigations announced on Thursday they have arrested seven criminals involved in crimes in Mombasa county.

They were arrested in their hideouts following tip-offs from the public.

Another suspected criminal was gunned down in Bondeni by police.

The new collaboration tactics make work harder for security officials because it requires increased personnel more widely deployed. Security staffing has been a problem in Kenya.

The new tactic also means the swoops may be less effective as gang members have moved to new territory.

"When these boys hack people and rob them, they run to these other areas. Police come to conduct their swoops in the affected areas. Innocent people end up being victimised," another woman told the forum.

The speakers' identities cannot be revealed for the sake of their security.

The women suggested that sweeps be simultaneous in Likoni, Miritini, Mikindani, Kisauni and Nyali.

Coast regional deputy police commander Ambrose Mwachia told the forum there are many emerging problems in dealing with gangs.

He sad, however, they have been "relatively successful" in smashing some gangs, which he said are mostly composed of youths aged 14 to 20.

Most of the boys do not take part in any sporting activity, yet they train in the morning, at lunchtime and in the evening. Why are they training?

NCIC vice chair Fatuma Tabwara said values have been eroded and parents today do not instil appropriate values in children. "That is why we are here. To sensitise our women on the importance of these values,” she said.

Mwachia also blamed some parents who do not monitor their children.

Gang members keep fit by training as many as three times a day at Bahari Club, Junda, Nyali, Mombasa and Bamburi beaches.

Mwachia said, "Most of the boys do not take part in any sporting activity, yet they train in the morning, at lunchtime and in the evening. Why are they training?”

“They are training to fight the police because they are members of gangs. It is not normal for a person to train in the morning, midday and evening yet they do not participate in any sport,” the deputy police boss said.

He called on women to help police by reporting any "suspicious training" by the children.

In most cases, police have found it difficult to make watertight cases against the gang members because witnesses fear coming forward.

Women at the forum said though police generally protect their identities, they fear testifying in court.

“Their colleagues come to court to see who is testifying so they can deal with them later. This prevents us from testifying" a woman from Shanzu said.