THIS WILL HURT POLITICIAN, VIPS, COPS

Matiang'i to strike hard at drugs and crime at Coast

CS says state will turn things upside down to unearth those under its wings, 'plan to hurt many people'

• CS says political leaders are reviving and reinventing criminal gangs under the guise of political mobilisation.

• Matiang'i's meeting with security officials and politicians was triggered by last week's gang attack that left at least 11 people injured by pangas. 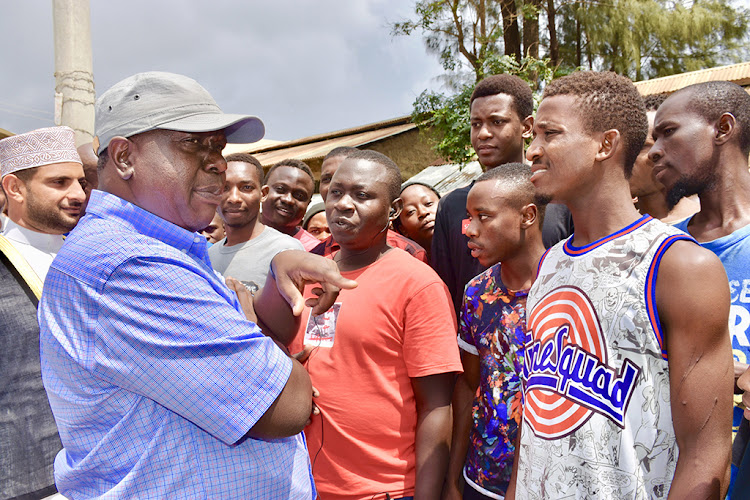 We're coming for you.

The new battle against drugs and crime at the Coast will be ferocious, merciless and hurt many people, including politicians, VIPs and dirty cops.

He declined to announce details of the plan, which he shared earlier with the political leadership and security chiefs on Sunday during separate meetings that lasted three hours.

The fight begins now. The plan will be rolled out in Mombasa before it extends to the other counties, he said.

"We will turn things upside down to unearth even those among security apparatus and highly placed state officials that have been shielding drug traffickers," Matiang'i said.

Now drug suspects will be bailed out of police stations by their protectors.

His trip and the renewed — yet again — war on drugs were precipitated by last Monday night’s attack by a panga-wielding gang on Bamburi residents. At least 11 people were slashed, four of them critically.

“The attack is symptomatic of deep-seated challenges we must address relating to security in the Coast," Matiang' told a press conference.

He blamed the drugs trade for virtually all insecurity, saying the approach will be "elaborate, drastic and ruthless".

Political leaders are reviving and reinventing criminal gangs under the guise of political mobilisation, Matiang'i said.

“There is a clear nexus between the movement and peddling of drugs in the Coastal region with certain political activities and with people who are highly placed in this society," he said.

“We are commencing an unprecedented effort to deal with drug peddling, especially as it affects Mombasa. It's going to be painful but we are prepared to start the journey."

He said drug trafficking has been spoken about for far too long without results.

“The people of Kenya don't want to hear threats and promises from me. They want to see results and I promise they will," Matiangi said.

He will personally supervise the battle with Police Inspector Hillary Mutyambai.

“We will follow it up and review progress weekly, let's not pretend we don't know the issues," the CS said.

The government will provide all necessary resources, personnel and equipment.

"This will address the possible fundamental gaps that hinder the war on drugs," he said.

The CS and Mutyambai flew into Mombasa on Sunday morning.

All the county commissioners, police commanders and police bosses from all the six counties were at a separate meeting. They got more of the details.

“The work starts now. We have agreed there will be no bailing out of drug suspects from any police station,” Faki said.

Mboko (Likoni) said the unprecedented meeting signalled a change in the way security operations will be handled.

“The measures have satisfied us even before the work starts. If the actions actually take place, the drugs menace will be a thing of the past. This is a new dawn,” Mboko said.

President Uhuru Kenyatta’s programmes to uplift the youth and provide employment for them are being undermined by the drug traffickers, Matiang'i said.

PRESIDENT Uhuru Kenyatta yesterday declared total war on the drug menace in the Coast region, saying no effort will be spared in eradicating the ...
News
7 years ago

The lobbies led by Haki Africa and local MPs cite SGR as the main driver of poverty in the region
News
3 years ago
Post a comment
WATCH: The latest videos from the Star
by BRIAN OTIENO Correspondent, Coast Region
Coast
12 August 2019 - 00:00
Read The E-Paper