Plastic Flipflopi dhow to set sail from Lamu to Zanzibar 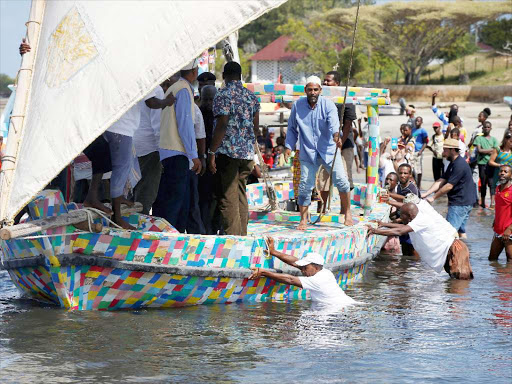 A traditional dhow, the Flipflopi, built entirely of plastic trash from beaches and towns will set sail this month from Lamu for Zanzibar.

The 500-kilometre voyage will involve port calls along the way where sailor-environmentalists will promote recycling of plastic waste.

The nine-metre Flipflopi dhow is the first of its kind. It was built of 10 tonnes of discarded plastics. Every single element has been built by hand and the whole vessel has been clad in colourful sheets of recycled flip-flops.

The team behind it has called for a change of mindset and recycling plastic waste through #PlasticRevolution. This is meant to stem the flow of 12 million tonnes of plastics into the oceans each year and to highlight the potential for reuse to benefit society.

The dhow was launched in Lamu on September 15 last year during celebrations to mark World Clean-up Day. Since then, it has been sailing in regional waters. Nine African countries have signed up for the campaign, promising to tackle marine pollution.

On Thursday, Environment CS Keriako Tobiko will preside over a press conference before the maiden voyage to Zanzibar.

“The Flipflopi is living proof that we can live differently. It is a reminder of the urgent need for us to rethink the way we manufacture, use and manage single-use plastics,” Msuya said.

She praised Kenya for by banning single-use plastic bags to reduce the epidemic. The ban was came into force in 2017.

Journalists will sail on the Flipflopi from Watamu to Kilifi on January 27, Kilifi to Mombasa on January 28 and Mombasa to Diani on January 30.

“We are moving in the right direction but need a drastic shift in consumption patterns and waste management worldwide,” Flipflopi board member Judi Wakhungu commented. She said the projecthelps the public to think about plastics differently.

“They have a colourful and innovative way of talking about the issue and their message is really hitting home, reaching parts of the population that other initiatives seldom do,” she said.

The expedition will start in Lamu on January 24. The dhow is expected to arrive in Stone Town, Zanzibar, on February 7, when the Flipflopi and Cleanseas teams will join Conservation Music at the Busara Music Festival. Festivalgoers will champion the war on marine plastic pollution through music and culture.

Only nine per cent of the nine billion tonnes of plastics the world has ever produced has been recycled.

The overwhelming majority of plastics are designed to be thrown away after single use, ultimately ending up in landfills and the environment.

Twenty-seven of the 192 countries have enacted legislation banning products including bags, plates, cups, straws, packaging and materials such as polystyrene.