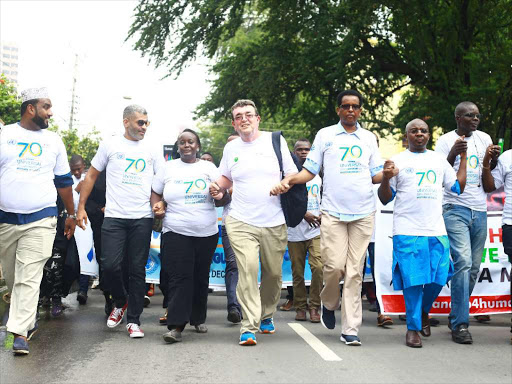 Coast leaders and human rights groups have called for the formation of a special task force to investigate cases of extrajudicial killing and forced disappearances in the region.

Governors and MPs said hundreds of families do not know the whereabouts of their loved ones. They suspect their relatives were picked up by police before they disappeared.

The call was made on Monday after lobby groups led by Haki Africa released new statistics showing 48 cases of extrajudicial killings have been documented since January.

Last year, there were only 18 such cases documented by the groups. Haki Africa executive director Hussein Khalid said 2018 has had the worst cases of human rights violations. Mombasa governor Hassan Joho said families across the region were living in fear because of torture, forceful evictions and enforced disappearances in the hands of security personnel.

“We might be in a comfort zone, but there are people sitting somewhere who cannot account for their own family members,” Joho said.

He spoke during a public forum at the Kenya School of Government in Mombasa on Wednesday last week. The forum was organised by the Building Bridges Initiative committee to collecting public views.

Joho said issues of extrajudicial killings must be included in the list of items under the BBI that was established by President Uhuru Kenyatta and former Prime Minister Raila Odinga.

“That must be discussed and a way found to bring it to a permanent closure,” Joho said. The Coast has borne the brunt of the extrajudicial killings, he said.

Matiang’i wants a public inquiry into extrajudicial killings and enforced disappearances initiated to verify data by the groups.

Muslims for Human Rights says at least 71 people have been victims of extrajudicial killing since last year.

On Monday, Matiang’i chaired a high-level security meeting to discuss the subject at his Harambee House in Nairobi.

The groups said cases of extrajudicial killings and forced disappearances were getting out of hand.

A number of CSOs in Nairobi have teamed up with their counterparts in Mombasa to find a lasting solution to the murders and disappearances.

Under the umbrella of Police Reforms Working Group, the organisations, which are about 10, have been holding dialogue sessions with police and residents of areas where most of the killings have happened.

The sessions are organised by the International Justice Mission and have been held with parents of victims, counselors, police and human rights activists.

IJM has embarked on a campaign to encourage dialogue between police officers, civil society organizations and community members in a bid to fight crime and stop extrajudicial killings.

Khalid said such interventions will go a long way to solving the matter. Public forums have already been held in Changamwe and Likoni areas in Mombasa where security personnel, CSOs and the community members have discussed the matter.

In Nairobi, Matiang’i directed Kibicho to have the next monthly security multi-sectoral forum in Mombasa. The sessions are often held in Nairobi. He said human rights groups should sit in the meeting.

“Seventeen people disappeared in Tana River, nine in Mombasa, eight in Kilifi and six in Lamu.”

Auma said non-cosmetic police reform is urgently needed. Matiang’i asked CSOs to present their reports during the Criminal Justice Reform Week to be held in July.

Mvita MP Abdulswamad Nassair is among lawmakers who have condemned the killings and abductions.

Nassir asked police to end gross violations of human rights. In 2016, Salim Bedzimba was shot dead by police. He was Joho’s friend and brother of former Kisauni MP Rashid Bedzimba.

Police said he was involved in a shot-out after a foiled robbery. He was killed alongside Kibwana Ahmed Abdalla.

“It doesn’t matter if Salim was related to Bedzimba. He was also my friend and police knew they were planning to kill him because they had been in communication with him,” Joho said on october 24, 2016.

“They (police) decided to go to his (Bedzimba’s) house where they murdered him in cold blood.”

Citing the murder of former Kabete MP George Muchai in 2015, Jacob Juma and Willie Kimani in 2016, Joho said there have been immense extrajudicial killings during President Uhuru Kenyatta’s term.

He attributed the increase to shrinking civil space which he blamed on skewed policies and knee-jerk reaction by security agencies.

“Security is part of human development. The basis of security is human rights. The two are not exclusive,” Shimekha said.