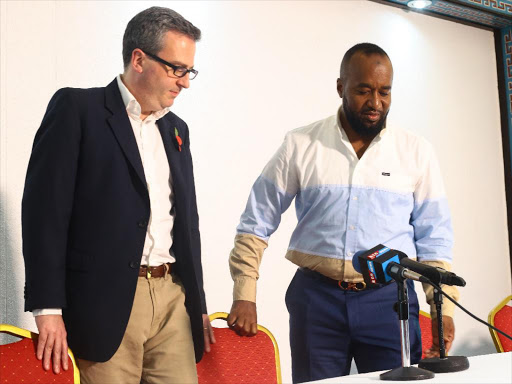 Mombasa Governor Hassan Joho on Monday announced the Jumuiya ya Kaunti za Pwani, an economic and intergovernmental bloc, will be revived.

It the bloc was formed in 2015, bringing together all the six Coast counties.

Political infighting and leadership wrangles derailed the initiative and made it dormant for close to two years.

Lack of political goodwill from the founding governors was also blamed for its dormancy.

This caused furore and mixed reactions from professionals, technocrats and academics who helped conceive it. Governor Joho said the counties had gainful engagement with their European partners.

"We have discussed the economic situation of our country, specifically in this region, and we have committed the six governors," he said.

"We shall find a common ground, even with those from the other side, to engage on how best we can move together, realise our ambitions and dreams for the the coastal economic bloc, which is JKP."

He spoke after a lengthy meeting with European Union envoys at Whitesands Hotel.

Kwale Governor Saalim Mvurya is the chairman of the bloc but his move to Jubilee disrupted the course.

Analysts say the bone of contention facing the Coast economic bloc has been the perception that it is political.

During a meeting held in 2015 in Lamu to advance JKP interests, Joho reportedly proclaimed those who were opposed to the bloc would not be elected in 2017.

Mvurya, too, during the Malindi by-election was reported saying JKP would field their own candidates in that election.

On paper, the bloc’s composition is said to be of elected leaders.

However, behind the curtain, there is a clique of selected individuals who do the bidding for the governors.

Joho said coast blue economy will be fully tapped through the bloc and help from development partners.

"We have had fruitful engagement on matters security, investment and development. We want to confirm we have look into critical areas that are important to the six counties," Joho said.

Hailey said they will support the Coast over the coming months and years.

"We have looked how we can work to continue promoting tourism and development in health, education, youth employment and infrastructure," he said.