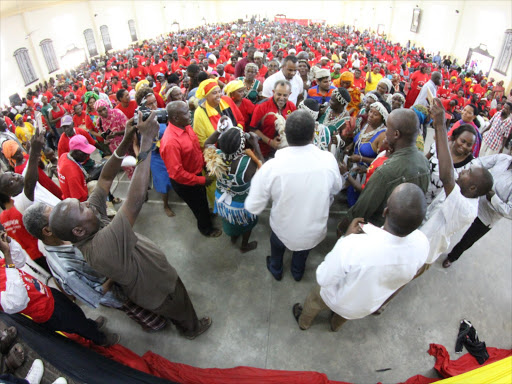 Despite being the second majority voters after the Mijikenda, there is not a single nominated MCA or executive in Joho’s administration.

Shahbal gave a 30-minute speech trying to sell his manifesto in Lohana Hall, Mvita constituency, where he met with Kambas.

Philip Ndolo, the Kamba Community Advisory Council leader and spokesperson, led the meeting to endorse Shahbal, who garnered 96,000 votes behind Joho’s 130,000 in the 2013 polls.

“Kambas want assurance that they will be included in the next Mombasa government. That is why we are behind Shahbal’s candidature,” Ndolo said, as he welcomed Shahbal to speak. Shahbal said he was in Wiper in 2013, but later bolted out of the party after trying to convince leader Kalonzo Musyoka to declare an interest in the presidency, but he refused.

Shahbal said immediately after the 2013 polls, he asked Kalonzo to declare that he will run for President in 2017, but the Kamba kingpin said he is waiting for NASA presidential flagbearer Raila Odinga’s endorsement.

“My brother Kalonzo told me to wait because Raila had promised him the presidency. I told him Raila is a perennial liar, but he never listened. Look at what happened,” Shahbal said.

“In the last meeting with Kalonzo at his Yatta home, I told him to declare that he will run for the country’s top seat. He said we should wait. I said after I leave the meeting, I will never look back. I will join the winning team Jubilee.” Shahbal said Kambas should support President Uhuru Kenyatta’s reelection because they will never benefit from NASA even if Raila wins the presidency.

“Politics is all about interests. Kikuyus and Kalenjins fought in 2007, but they came together for the sake of their community. We need to come together and support Uhuru for the interest of our people,” he said.

The Kambas at the meeting said they would rally behind Uhuru, DP William Ruto and the Mombasa Jubilee team. Shahbal took a swipe at Joho, saying he has failed in developing Mombasa.

He said he kicked hawkers out of Mombasa town without providing an alternative area to conduct business.

About 80 per cent of the hawkers in the region is from the Kamba community.

“You cannot kick out hawkers without building a market for them. The so-called Sultan has failed completely,” Shahbal said.

The land in question is behind the Coast Provincial General Hospital and Allidina Visram High School. For a long time, it has been used as a harbour and boatyard.

It borders the Indian Ocean Creek, which stretches from Old Town to Tudor Creek. A prominent Mombasa business family claims to own the two-acre plot, having bought it from an insurance company.

Muhammad Fayaz, one of the family members, however, could not give the exact date or year when the family acquired the plot.

“We are the genuine title deed owner of this land bought, say 20 or 15 years ago,” said Fayaz, during a protest by fishermen and boat builders.

Post a comment
WATCH: The latest videos from the Star
by CHARLES MGHENYI @CharlesMghenyi
Coast
20 June 2017 - 02:00
Read The E-Paper