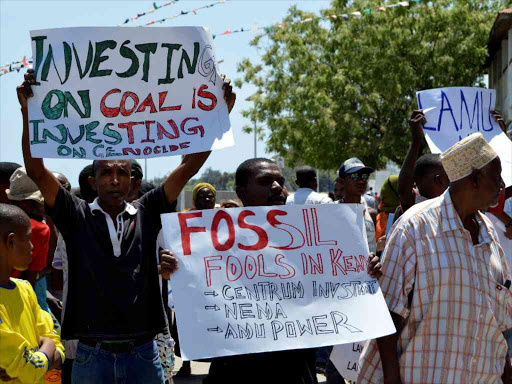 Residents hold placards as they march in a protest against Kenyan government plans to build East Africa's first coal plant near the coastal town of Lamu, December 6, 2016. /REUTERS

Kanyiri said they refused to support the initiative by Amu Power Company after the firm refused pay them.

The coal-fired power plant will be set up at Kwasasi, Hindi Division, in Lamu West subcounty.

Speaking in his office on Monday, Kanyiri said some people have been compromised so they can frustrate the project.

“We understand some individuals here, including activists, have been paid to oppose the project. We also know some went to the extent of demanding bribes but their plans fell through,” he said.

The county commissioner said some activists have been sponsored by foreign agencies. but did not elaborate.

He said the government will not back down on its plans to build the plant as the project had been assessed and passed safety tests.

Kanyiri said the plant will improve the economy of Lamu and Kenya as a whole.

The commissioner said those discrediting the initiative are enemies of development, and urged residents to ignore people who politicising the project.

He assured residents whose land has been hived off to accommodate the plant that they will be adequately compensated.

“This a project between the investor and the Government of Kenya, and it is being conducted according to the law. There is evidence that this isn’t the first project of its kind in the world.

He denied claims that the investor had not consulted the affected residents, and said more than 60 meetings have been held between the firm, residents and the government representatives. Save Lamu Organisation chairman Mohamed Abubakar, which is against the project, denied the organisation has been bribed.

He insisted the project poses health threats to locals and the land and marine environments.

“Those are baseless allegations and pure lies. All we know is that the project is harmful. Period. That remains our stand and we have vowed to never to allow it to take off,” Abubakar said.

The project is expected to generate about 1,050MW of power. It will be the first coal plant in East Africa, if constructed.

The plant is part of a plan to more than double Kenya’s electricity generating capacity to about 6,700 megawatts this year.

It will provide power for industries and create jobs.

But the project has divided communities.

The county is near Somalia that has been hit several times by al Shabaab militants.

The battle over the plant highlights a challenge of governments across the region seeking to reduce poverty by investing in major infrastructure projects.

“We shall fight the coal plant,” said Walid Ali, who teaches in a local Islamic school in January.

Ali was among the people who took part in demonstrations in Mombasa in January to protest against the project.

“This coal plant can be a blessing,” said farmer Simon Gathoni.

“Those opposing this project are not even landowners here.”