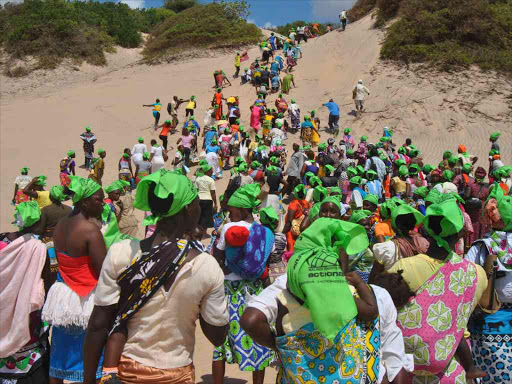 More than 1,000 women from Magarini subcounty climbed high sand dunes on Thursday to protest against land injustices and demand their right to own land.

The women were young and old, some physically challenged. They were supported by some men in their demand for title deeds in their own names.

They marched from Mamburui along the beach for two kilometres, before climbing the sand dunes.

The dunes are high and it is difficult to reach the top due to shifting sand, high humidity and hot sun. They are known as ‘mini Mt Kilimanjaro’.

Traditionally women in Magarini and Kilifi county at large do not have the right to own land.

Wearing scarves labelled ‘hashtag stand up for women to Kilimanjaro’, ‘Action Aid Kenya’ and ‘Malindi Rights Forum’, the women began their two-hour journey to the dunes under the hot sun while singing songs.

They carried placards bearing the words ‘I stand up for women’s rights to land’.

Since they did not carry water, the women dug a well in the sand dunes, less than a meter deep, to quench their thirst.

They likened the tough climb to the challenges women face in the county.

Their leader Trufena Manga, the chairperson of Malindi Rights Forum, said the tough climb will show the world how women in Kilifi county suffer — and still are denied the right to own land.

“We want the constitution to be implemented. It says everybody has the right to own land,” she said.

Chadi Charo, an elderly woman, said women customarily were not supposed to own land; only their husbands’ names are on land documents.

“My father sold me off at the age of 16 to get money and drink traditional palm wine (mnazi). I have no right to own land and I have suffered all my life,” she said.

“I have six children and they are all in school. Enough is enough, it’s time women get rights as stipulated in the constitution.”

Margaret Nduku of Magarini said she has been unable to get a title deed after her husband’s death because the record only shows his name.

“The process required to change ownership is long and expensive and I cannot afford it,” she said.

The demonstration was also a preparation for East African Mt Kilimanjaro climbing in Arusha on October 13.