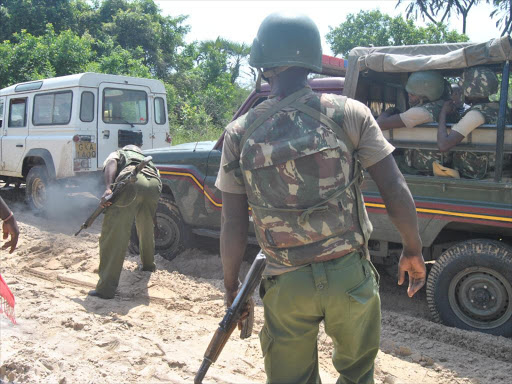 Security officers keep guard at along the Lamu Kiunga road within the Boni forest./ALPHONCE GARI

Eight months on, security officials have declared the Boni Forest operation a success. But they are tightening border protection following the emergence of IS in Somailia

Some 36 al Shabaab members have been arrested in the Operation Linda Boni. It enters its eighth month today. The Boni Forest security operation was extended indefinitely yesterday. It was launched on September 11 last year to flush out al Shabaab terrorists launching attacks from their hideouts in the forest.

Head of the security operation James ole Serian said the suspects were handed over to security officers, including the anti-terrorism police unit for profiling and prosecution. “The suspects were arrested within the vast forest and several weapons recovered. Some were released after questioning while others were prosecuted by courts,” he said.

Speaking to the Star yesterday, Serian said they have established a military camp, and nine police stations staffed with officers, Kenya Wildlife Service rangers and forestry officers. The stations have already been gazetted by the state and will be permanent within the vast forest.

In December, the operation was extended to four other areas – Bondhei, Pandanguo, Witu and Pangani – which are in Garissa and Tana River counties. The forest along the Kenya-Somalia border extends into Somalia to form the Lacta Belt. Several people, including security officers, have been killed in attacks by the militants, who often use improvised explosive devices.

Serian said although the operation “has been successful”, al Shabaab remains a threat in the area, hence the need to maintain vigilance. He said security has been increased along the border following the emergence of Islamic State in Somalia. “Intelligence reports indicate that the IS has already established allegiance with sections of al Shabaab,” Serian said.

Last month, IS claimed responsibility for bombing an African Union vehicle in Mogadishu, marking its first attack in Somalia. The vehicle was hit by an IED in Taridish.

In September, KDF captured al Shabaab strongholds in Boni Forest. Military and police sources reported the militants had abandoned the camps and fled into Somalia. Militants of the 300-man Jeysh Ayman, an al Shabaab cell, used the forest’s cover as a base for recruiting and waging terror attacks in the Coast. Before the operation began, al Shabaab raided villages and lectured locals against tipping off police. In March, KDF announced the operation had been a success.

Post a comment
WATCH: The latest videos from the Star
by CALVIN ONSARIGO @kalvohonsa
Coast
11 May 2016 - 05:00
Read The E-Paper