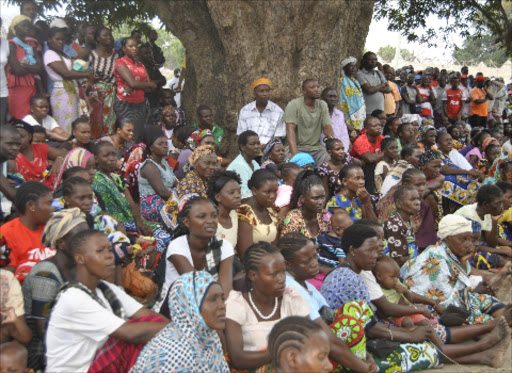 UNHAPPY: Squatters of Sabaki in Magarini subcounty at a meeting with local leaders yesterday. Photo/Alphonce Gari

More than 2,000 squatters of Sabaki in Magarini subcounty yesterday threatened to invade the Agricultural Development Corporation land in the area.

They said the land is being grabbed by tycoons and other influential people from the government.

The residents attempted to stage a demonstration if they were blocked from accessing the land, forcing the provincial administration to intervene.

They started flocking in hundreds from as early as 7am after word went round that that there would be free land division.

The squatters converged at Kwandomo area waiting for a go-ahead from two MCAs, Edward Delle and Nixon Muramba, who were to lead them to the land.

The squatters said they were promised land by the government in 2006 but nothing has been since.

They said they later learnt that some influential individuals were allocated the land with title deeds.

After waiting for more than five hours, the MCAs emerged followed by Malindi assistant county commissioner Elizabeth Ngige to hold a meeting with the locals.

The ADC land formerly belonged to the residents but was taken by the government to implement an agricultural project.

During the tensed meeting, local leaders said the residents have waited for long to be given land and have now lost patience.

One of the squatters, Stephen Stembo, produced documents as proof that the 3,500-acre land has been allocated to individuals and companies.

Stembo said ADC Kisiwani, which is part of the larger ADC land, was subdivided into six plots with title deeds.

The documents stated that the plots were allocated to Chebek Company Ltd and Naki Investments.

Other documents indicated that Sinavoc properties is selling the plots at between Sh4 million and Sh22 million with each acre going at Sh4 million.

Ngige told the residents not to demonstrate or forcefully takeover the land but follow the right procedure to get it.

Post a comment
WATCH: The latest videos from the Star
by ALPHONCE GARI
Coast
12 February 2014 - 00:00
Read The E-Paper